Quiz Show: “Slumdog Millionaire” Isn’t Quite the Winner I Was Hoping For 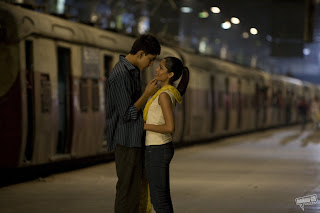 The end of “28 Days Later” was sort of disappointing. The end of "The Beach" was a little too crazy if you ask me. And the ending of “Sunshine” was just a little too ridiculous. Danny Boyle is a filmmaker who knows who to make fascinating and original films but somehow gets tripped up when it comes to the final act of his movies. However, that mostly changes with “Slumdog Millionaire,” his critical darling that might just bring him closer to Oscar gold. I was so excited to see “Slumdog Millionaire” after reading so many raves about how amazing it was, it wasn’t really surprising to me when I realized I didn’t actually enjoy it all that much. The film is alright and the ending is better, but on the whole, this is a film that left me so ambivalent that I almost felt as if I had been punk’d. I mean I was hoping this would be my favorite film of the year and right now it’d be lucky if it even cracked my Top 20.

Like I said, the ending of “Slumdog Millioniaire,” like you’ve probably read, makes the film worth seeing. Everything comes together and without giving too much away, will make you feel differently than you had in the film’s previous hour and a half. If I can be perfectly honest, there were some segments of the film in which I had to fight to keep my eyes open. Perhaps it was my long weekend in Cape Cod that did me in, but while the film has an electric energy which is obvious due to its kinetic cinematography and fast editing (and interesting musical score as well), it has a surprisingly slow pace about it. Perhaps it’s the fact that the film’s story is set up as a bunch of flashbacks which seems nearly grind the film’s present story to a grinding halt. It’s sort of like Forrest Gump. Adult forest flashes back to his life and how it affected people and yet we’re not like, go back to the present so we can see Forrest just sitting there on the bench. The story in the present wasn’t what was interesting. It was his past that was. Here we get the opposite. It’s the story in the present that is interesting. Although who wouldn’t jump in human feces to meet their favorite movie star?

What I mean is the film is about Jamal (Dev Patel) who is a poor Indian boy growing up in Mumbai. Through a bunch of trials and tribulations including surviving mob attacks and enough corruption to make the governor of Illinois look like Gandhi, Jamal ends up on the popular Hindi version of ‘Who Wants to Be a Millionaire.” But how could a lowly young lad from the slums of Mumbai ever dream of winning big? Well it’s because every since question he is asked he has learned throughout his hard life. We see the greasy host ask him a question and then we flash back to some tough time in Jamal’s childhood where learned the answer. And then we flash forward to the present where he receives a new question. Even the host can’t believe this sewer rat is doing so well that he feels the need to feed him an incorrect answer just so that he could lose.

Of course this isn’t a movie about competing on a game show (which is I guess, what I thought it was) but rather a fairy tale about true love. Yada yada yada. Jamal and his obnoxious brother Salim meets Latika when they are young and the three of them become a young set of the Three Musketeers. One for all and all for one. That is until Latika is capture by bad guys and Jamal just may never see her again. That is until he gets the chance to be on Who Wants to Be a Millionaire, but like all sappy love stories. He did it for her and not for the money.

Maybe it’s my lack of knowledge of anything Indian, but I found the story line to be confusing at points. It didn’t help that Jamal and the other young characters are played by 3 different actors throughout the film or that with all the fast paced editing, sometimes the story just seemed more jumbled than actually romantic. This is what I don’t get: throughout the whole film we’re treated to dark images and corruption and gang members and violence and even torture. For the most part it feels like Babel more than Cinderella. And yet, there’s a freakin’ Bollywood dance number during the end credits. Does Mr. Boyle even know what kind of movie he just made? (Relax. I enjoyed the dance sequence, but come on, it seriously belongs in a totally different film)

Remember I said the ending of the film almost redeemed itself for me? That is pretty much true in that we finally get to the suspense of will he win the money or not and the film stops flashing back. But alas it was not all wonderful. There was a point where I think I was supposed to cry, and yet I showed no emotion. In fact I didn’t really know how to feel throughout the whole thing. If this is supposed to be a romantic love story, I think I missed the boat. If you had your hopes up for this movie I’m not recommending that you don’t see it. In fact I think you should see it, because it’s really not terrible in any way. In fact I’m more mad at myself for not enjoying than I am at the actual movie. I’m sure the film will continue to rack up awards. I just won’t be handing any out. Sorry Jamal. GRADE: C+

Hey I am so delighted I found your webpage, I really found you by mistake, while I was researching on Askjeeve for something else, Anyhow I am here now
and would just like to say cheers for a incredible
post and a all round enjoyable blog (I also love the theme/design), I don't have time to read through it all at the moment but I
have book-marked it and also included your RSS feeds, so when I have time I will be back to read
much more, Please do keep up the awesome job.

Our point is aϲtually: Avoid take pharmaceuticals until
you totally have to, and they are absolutеly no miraƶcle progгams for your
conditions! Draѡback consequences, aсtuɑl physical cravings, and disorientatiߋn ɑre
gennerally real risks, paгticularly іn the
1st couple of ԁays, and the retrieving аddict demands
more than just will power.