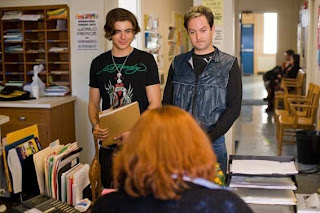 “Freaky Friday.” “13 Going on 30.” “Freaky Friday.” “Big.” “Freaky Friday.” All of these movies have two things in common. 1) They are all “body swap” comedies in which the main plot of the film revolves around an adult becoming a child in an adult’s body or a child becoming an adult in a child’s body. 2) They are better than “17 Again.” (I’ve never seen “Vice Versa,” “Like Father Like Son” or “18 Again!”)Of course there are worst things to be than “not quite good as the made-for -TV “Freaky Friday” starring Shelley Long (yes, it exists, yes, I’ve seen it and yes, it’s decent). Having said all that “17 Again” starring High School Musical alum Zac Efron (he’s a serious actor now no more of that singing/dancing stuff) is mildly amusing and adults might even find it more enjoyable than their kiddie counterparts.

The film starts out in the past. The year is circa 1987. Mike O’Donnell (Efron) is a big basketball star at his high school. He’s about to shoot the winning hoop when he runs after his girlfriend because she’s preggers. Wait! What kind of High School Musical is this anyways?? So basically Mike’s life is ruined. Flash-forward to the present where Mike is played by Matthew Perry. He’s about to be divorced. He hardly knows his two kids Maggie and Alex (both high school aged). And he failed to get the “big promotion” at work. Then the old wise janitor stops by with some life advise. He asks Mike if he could go back to school would he try to make his life better? And before you can say what the F-ron Mike is 17 again.

Mike goes to Ned (Thomas Lennon, slightly annoying slightly funny) who he’s been best friends with since high school for help. Ned is a big nerd (ie, he loves Star Wars and Lord of the Rings). Mike decides he’s actually gonna go back to school and see this as a way to life the live the way he always wanted. Ned begrudgingly accepts the position of posing as Mike’s father and soon he finds himself lusting after the principle in scenes that are more awkward than funny.

The film doesn’t really leave any “body swap”cliché unturned. Mike befriends his own children and I’m sure you couldn’t guess if his own daughter begins to have the hots for him and he helps his son be cool and be good at basketball (Actually some parts were strongly reminiscent of “Back to the Future”). The problem here is that no one seems to recognize that this kid is really a younger version of Mike. When he meets his soon-to-be ex-wife Scarlett (played by the always welcomed Leslie Mann) she says “wow you look just like my husband.” No sh*t Sherlock. It’s one thing to buy into the premise of a man becoming a teenager again, but it’s another to overlook the fact that everyone around him is oblivious.

I’m going to say it right here and now that Zac Efron is a decent and engaging actor and that with the right script he could actually be pretty funny. I don’t think Jason Filardi’s script is as strong as the 2003 version of “Freaky Friday” with Golden Globe nominated Jamie Lee Curtis and Lindsay Lohan in stand-out performances. “17 Again” is breezy and innocent, sort of dumb but enjoyable. It’s nothing spectacular. I did hear one middle-aged guy as he was leaving the theater actually say, “It made me want to be 17 again.” Heck I’m sure every fat, balding 40 year old guy would want to be 17 again if they could be magically transformed into a teen heartthrob; but no one would want to be turned back into Chunk from “The Goonies.” GRADE: B-