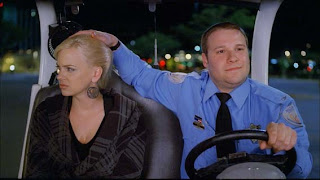 “Observe and Report” is sort of weird. By now you’ve probably heard that the movie is a little dark, that it features the lovable Seth Rogen in not the most lovable role and the whole thing is a bizarre “Taxi Driver” meets “Paul Blart” concoction. All of that is true, but honestly, it’s so different from what you’re expecting I can only recommend it. See it because it seems like a Judd Apatow flick, but stay because it feels more like Martin Scorsese.

The plot of the film isn’t really well defined but I’m willing to forgive that because it features Anna Faris in another hilarious turn as a ditzy department store make-up girl. Seth Rogen is Ronnie Barnhardt who takes his job as head of security at a mall very seriously. At the start of the film a large man is seen flashing several female mall patrols in the parking lot. Ronnie is instantly bent on finding this pervert and taking him down. Things really get serious when the man flashes Brandi (Faris) whom Ronnie has a large crush on. It’s his civic duty to protect his love from this flasher. When the cops don’t seem to be much help, which includes Detective Harrison (Ray Liotta), Ronnie decides he might as well join the police force himself.

The whole movie sort of feels like it’s leading towards Ronnie learning how to become a police officer, but somewhere down the line it sort of gives up on that. Ronnie doesn’t quite “make it” and were left with a depressed Ronnie who is hell bent on also figuring out who has been robbing various stores in the mall during the night. It turns out the culprit might just be under his nose. Meanwhile we luck out and get lots of funny behavior from Faris. Ronnie takes Brandi out on a date where she gets super drunk and ends up drooling vomit all over herself. Priceless. And the one who really steals the film is Celia Weston who plays Ronnie’s boozing non-mom of the year.

Remember I said the film was dark? In one scene Ronnie goes on a ride along with Harrison who leaves him on the corner of a really dangerous neighborhood. It seems like a scene right out of “Mean Streets.” And even the film’s finale features Rogen taking on a horde of police officers whom he has to beat off with his flashlight. And the best part ever had to due with the return of the flasher. I sort of think writer/director Jody Hill (who is a man by the way) actually made this movie as a tribute to the gritty crime dramas purveyed by the likes of 70s directors like Scorsese and William Friedkin. I mean honestly, Ronnie thinks of himself as Popeye Doyle and yet he’s only a mall security guard. And I don’t think the casting of “Goodfellas” alum Ray Liotta was a coincidence.

So yeah, “Observe and Report” is darker than your typical “Apatow” movie. There’s sort of a sweet romance going on with a coffee shop employee who obviously has a little thing for Ronnie but it hardly “lightens up” the mood of the movie. Even a comic turn from Michael Pena from “Crash” is sort of weird and odd. Yeah the movie has a strange vibe but I was sort of digging it. It seems like a welcome breath of fresh air, besides if you want something more lighthearted maybe you should see the Hannah Montana movie instead. GRADE: B