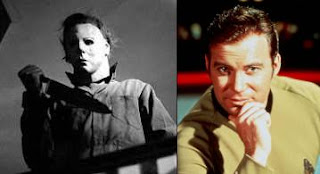 With both a reboot of Star Trek and Halloween both due this summer it got me thinking. Why doesn't director Rob Zombie use Chris Pine's face as a model for Michael Myers' mask? You're probably asking "what the heck are you on?" What you probably don't realize is that the entire look of Michael Myers is based on William Shatner's mask from his Captain Kirk character. Yeah they basically took a Captain Kirk mask, spray painted it white and voila, you've got one of cinema's scariest villians. So since Zombie is making a sequel to his Halloween reboot/reimagining/revamping/prequel from 2007, I think they should take a Chris Pine Captain Kirk mask paint it white and there you go. Michael Myers revamped for the Twitter generation. 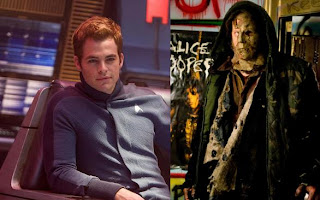 Watch the trailers for H2: Halloween 2 and Star Trek below:

Ha! I didn't know that. Great idea! You should write a letter to Rob Zombie. (Or at least EW since they're already big fans of your work -- maybe they'll put your comments in their magazine!)