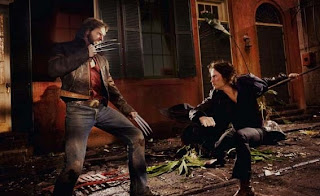 I think of the X-Men movies simply as either a) “comic book movies” or b) “science fiction movies.” They are entertaining movies, but they are also a little deeper. They have interesting characters and involve fascinating social and moral issues into their storylines. It seemed like such a sad day when the X-Men films came to a close with “The Last Stand” a film I personally didn’t love at first, but have certainly come to like much more than when it was first released. So rabid comic book geeks, er, fans rejoiced when they learned a series of prequels would be made about several individual X-Men characters. First up at bad is Wolverine and director Gavin Hood (Totsi, Rendition) has given us X-Men Origins: Wolverine. After this weekend, it’s Fox 1, audiences 0.

The new Wolverine movie is just a clichéd action movie filled with explosions, wisecracks and horrible CGI. To think the budget on this film was more than any of the other previous X-Men films is ridiculous (Ok, for the record, according to boxofficemojo.com, The Last Stand cost much more, but this new film still seems like a waste of money to me). Having said all that, I’d be lying if I said I wasn’t entertained by Wolverine. It comes in at less than two hours and Hugh Jackman is such an appealing actor that he can make any film more interesting (of course he didn’t help “Australia” that much).

I think the problem here is that with the recent surge of quality comic book translations (ie “The Dark Knight,” “Iron Man,” the “Spider-man” flicks, yes even part 3) we’ve become spoiled with well made but entertaining movies about superheroes. I told myself going into Wolverine not to expect an Oscar movie, since this is officially the start of the summer blockbuster season and the film works on a sheer action adventure level and nothing more. We get to see how Logan came to be known as Wolverine, got horribly fake-looking metal blades implanted in his fists, and how he pretty much immortal.

The film opens with a brief prologue set in the 1800s when Logan is just a child. He and his brother grow up and fight in every major American war. Having the ability to heal instantly helps while being shot endlessly by enemy fire. His half brother Sabretooth (Live Schrieber) goes rogue and evil like siblings tend to do in movies like this and Logan must stop him. Meanwhile there’s some guy who wants to steal all these mutants so he can harvest their powers to make an ultimate mutant.

I enjoyed the corny bantar between Wolverine and his mutant team who he fights with at the beginning the film which includes too brief appearances by Dominic Monahan as Bolt and Ryan Reynolds as Deadpool. Scott Summers, aka Cyclops, shows up as a high school student (played this time by Tim Pocock). Friday Night Lights star Taylor Kitsch shows up as Gambit who turns playing cards into deadly weapons. And some guy named Scott Adkins shows up at the end as the nearly impossible to kill/invincible bad guy to kill at the end Weapon XI. I want to believe writers David Benioff and Skip Woods are comic fans, but if they are they certainly don’t show it (and they seriously give the “I’m so cold” line to a dying character; you could seriously hear everyone’s eyes rolling in the theater). They don’t give the characters anything too interesting to do and Jackman, while sometimes charming and good at kicking ass, has way too many anger management problems. I mean hearing him scream and growl a couple times seems appropriate after the 435th time I was willing to pay for his therapy.

All in all, you could certainly do a lot worse than Wolverine’s solo picture, it certainly is an explosive way to start the summer and it’ll make a fun companion piece to all your other action flicks in your DVD/Blu-ray collection when it’s released in four months, but here’s looking to the stars to see if “Star Trek” will be the action blockbuster that is equally entertaining and smart. GRADE: C+