Mate Expectations: “Ghosts of Girlfriends Past” Isn’t Quite as Horrendous as You’d Expect, OK It Sort of Is 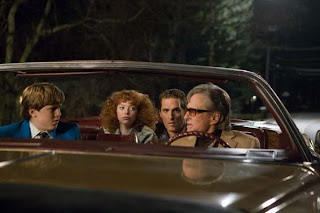 It’s not too shocking to be apprehensive about a romantic comedy starring Matthew “No Shirt” McConaughey these days. He’s been in his fair share of clunkers lately so it was with gret trepidation I “wondered” into a showing of his latest vehicle “Ghosts of Girlfriends Past” which is a wacky take on the Charles Dickens classic “A Christmas Carol.” The real bright spot here for me dawg is a) director Mark Waters who helmed both Mean Girls and Freaky Friday b) borderline comedic goddess Emma Stone who was great in ‘Superbad’ even better in ‘The House Bunny’ and simply fantastic here and c) Michael Douglas totally cashing in a paycheck as a womanizing ghost with the most.

The film is average at best in its opening scenes, but they are necessary to establish the story and characters. Basically, Connor Mead (McConaughey essentially playing himself) is a womanizing big shot photographer who likes to sleep around and refuses to commit to any one woman. He travels to the home of his dead Uncle Wayne (Douglas) for his brother Paul’s (Breckin Meyer) wedding to Sandra (Lacey Chabert). Sanda’s maid of honor is Jenny (Jennifer Garner) who Connor just so happens to have a past with.

While in the bathroom dead Uncle Wayne’s spirit shows up and tells him that he’s got to stop his womanizing ways. He also says Connor will be visited by three ghosts who will teach him hard hitting life lessons which usually tend to happen in movies like this. Before he knows one of Connor’s past girlfriends named Allison Vandermeersh (Stone) shows up, in full 80s garb I might add. Stone is utterly likeable that she can make any line funnier than it is. I guess Anna Faris’ charm rubbed off on her during the filming of The House Bunny. Allison takes Connor to his childhood where he first meets Jenny and takes her picture with a Polaroid camera. We learn that his parents died in a car crash and it was Uncle Wayne who took him and his brother in. Not that he had much of a choice, but Wayne is probably the worst role model on the planet.

All the scenes taking place in Connor’s past work the best because I somehow found it interesting to see why Connor became the way he is. Wayne brings him to a bar as a kid, he orders him a drink and shows him how to pick up women. Not girls, women. Even Allison observes that it’s all sort of messed up. A second spirit, in the form of Connor’s Indian personal assistant Nadja (Emily Foxler) shows Connor the present in which his brother future sister in law and all their friends complain about what a jerk Connor is. And the last spirit shows Connor his horrible future in which no one but his brother attends his funeral.

So basically Connor realizes his grotesque lifestyle as being, well grotesque and vows to change his ways and make Jenny his mate for life rather than just a notch on his already crowded belt. Garner and McConaughey have some chemistry but actually not too much is required because they aren’t actually the sole focus of the film. When a secret is revealed about Paul and a bridesmaid, Connor must make things right with the bride and groom.

Writers Jon Lucas and Scott Moore follow rather standard plot guidelines including the jerk character who isn’t a jerk by the film’s conclusion, the separation of a couple and them reuniting and even the crazy bride who can’t seem to hold it together even when her wedding cake goes crashing to the floor. But I’d be lying if I said I didn’t actually laugh out loud throughout the film. The scenes with Douglas are funny and Stone is charming as well. Mark Waters has pretty good comic timing but I still wish he’d return to his darker roots. But maybe the strength of Mean Girls lied more with its script than its direction. In any case, this is certainly an improvement over the dreck that was “Just Like Heaven.”

In the end, “Ghosts of Girlfriends Past” has enough funny moments that let you forget that you’re actually watching a formulaic romantic comedy that is loosely based on a Charles Dickens novel. If anything the release date just feels wrong. Shouldn’t this have been released in November or December? You can do a lot worse than the wrong release date after all right? GRADE: B-