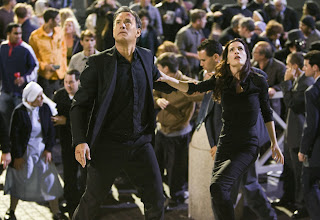 I already know the question that you’re going to ask: what is better, Angels & Demons or The Da Vinci Code? It’s a tough question but I think in terms of the story itself The Da Vinici Code offers more controversy and more fascinating discussions of hidden meanings hidden in famous artworks. The Da Vinci Code was an enjoyable movie as long as you weren’t expecting the second coming of Christ (no pun intended). Most people balked at the nonsense of it all, which the novel never downplayed either, and the stop and go style of lets talk about this painting, ok lets run away from the bad guys now, ok lets pause for more exposition. “Angels & Demons,” like a new car model, is sleeker in design, and although it looks better on the surface I’m not sure it’s really all that much better than the previous model.

Angels & Demons is based on the book of the same name by Dan Brown who also wrote The Da Vinci Code. You would certainly know it just by reading the first few chapters as both stories are almost identical. Angels & Demons was written first, but the movie has the events of Da Vinici Code (in which Harvard professor and religious symbologist extraordinaire Robert Langdon discovers that Jesus had a bloodline and by bloodline I mean him and Mary did the nasty nasty and birthed a human child) having already taken place. But don’t worry you don’t really need to see the first film to really get what’s going on. Langdon is paged this time because a scientist has been murdered and branded with the sign of the Illuminati. The Illuminati were an old group of scientists who were outcast by the church for believing more in science than the church. The pope has died at the Vatican and it’s time for conclave (the choosing of a new pope) and four cardinals have been kidnapped and are going to be murdered and then the entire city is going to be wiped away from stolen anti-matter (anti-matter = science= evil=demon; religion=good=angels angels and demons, get it?) will detonate at exactly midnight!

The film follows a similar pattern to The Da Vinci Code in that Langdon (Tom Hanks, this time with shorter hair) pairs up with a foreign beauty, this time with Vittoria Vetra (Munich’s Ayelet Zurer) in hopes of finding the stolen anti-matter before it causes an explosion so big that everyone will die. And without a pope yet elected how would he save everyone!? I think one of the most fascinating aspects of this story is the whole pope thing. The Roman Catholics has always been a rather mysterious and powerful entity on this planet. The way they go about the process is pretty fascinating. All the powerful cardinals lock themselves in a room and vote on who they think the pope should be. If they can’t come up with an agreement black smoke will be seen rising from the Vatican chimney. It is not until white smoke emerges until the world will see a new elected pope.

Meanwhile Langdon and Vittoria are on a race against time. An evil member of the Illuminati has kidnapped four cardinals and will execute them every hour on the hour unless they can find the clues to get to them in time. This whole premise instantly makes for a more suspenseful than The Da Vinci Code. The whole thing takes place during one evening and therefore makes for a pretty intense experience. This film also gives us a great performance from Ewan “young Obi-Wan” McGregor as the pope’s camerlengo, which is the pope’s right hand man and the acting pope in the even of his death. You won’t really be too surprised in terms of what his character is up to, but McGregor sells it pretty well.

I think the biggest problem with both this film and The Da Vinci Code is probably director Ron Howard. Ok, don’t get me wrong I like the guy and some of his movies are really good (see Apollo 13 or A Beautiful Mind) except that I get this overwhelming feeling that the movies would be more suited to a more action-oriented director. Am I wrong? If anything, I’d love to see Spielberg direct a Dan Brown adaptation. Hey what about Ridley Scott? I can’t help but think that Howard can get a little dull at times. Angles and Demons is much more quickly paced than its predecessor which is good and I think the script (co-written by David Koepp and Da Vinci scribe Akiva Goldsman) works a little better by being a little tighter. However by being a little more action oriented you obviously loose a litter character development which means some motivations are sort of left to your assumptions which isn’t always a good thing.

"Angels and Demons" is definitely passable entertainment. It has some good sequences and offers enough intrigue to keep you entertained for its 140 minute runtime, but I can’t help but feel that in other hands it could have been even better. If the Da Vinci Code had been as tight and sleek as this film that would be the ultimate Dan Brown flick. I’m hoping the third film (assuming Brown’s next novel is adapted, um yeah it will be) will be handed off to someone else. Where’s Brett Ratner when you need him?? (Just kidding) GRADE: B-

Wow, wonderful blog layout! How long have you been blogging for?
you make blogging look easy. The overall look of your web site is great, as well as the content!