Sky Tension: Pixar’s “Up” is a Fantastic Adventure That Receives My Highest Recommendation 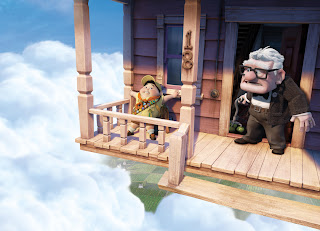 Well geez how boring is this? Pixar and Disney have teamed up to make their 10th full length animated feature and you know what? It’s just as good as all the others. You’d think there’d be room for a turkey somewhere right? But no, “Up” is simply another marvelous, colorful extremely fun adventure with great characters and wonderful animation that yet again pushes the boundaries of anything you’ve ever seen before. The story follows one of the most unlikely relationships ever between a grumpy old man and a naïve little boy who experience a journey like no other. Pixar has added another winner to their already overly prestigious crop of films and prove yet again that they have the most talented and original filmmakers on the planet Earth.

How does Pixar do it? How do they come up with such rich and creative ways of telling stories? “Up” is a wonderful story that may not seem like much on paper but it comes brilliantly to life up on the screen. We’re introduced to Carl as a young boy who urges for adventure from the likes of his movie idol Charles Munz (Christopher Plummer). Carl meets Ellie who is adventurous as well. They fall in love and spend a happy wonderful life together which we see all before our eyes as the film begins. They even have a scrapbook which will document all their life’s adventures. One of their biggest dreams is to go to the wilds of South America, but as they grow older that isn’t meant to be. Ellie then passes away during one of the film’s most touching and saddest sequences and now Carl (voiced as an old man by Ed Asner) is all alone. Grumpy and crotchety and refuses to sell his house to the land developers in charge of the construction going on all around his quaint home.

One day Carl decides he’s had enough and since he’s got nothing left to lose (he’s already being forced to move to an old folks home) he attaches thousands of balloons to his home in hopes of floating all the way to South America. The only dent in his plan is a young wilderness scout has stowed away on his front porch who just wants to help an old person so he can get a new patch. The young boy’s name is Russell (Jordan Nagai) and he’s one of those slightly annoying young kids who you hate at first and come to love once you get to know him. These two characters seem like polar opposites, but it’s their love of adventure that gives them that connection.

I don’t want to talk too much about what happens after they lift up and head for South America because that would be ruining most of the fun. I will say that they certainly have one of the most wacky and outrageous adventures this side of an Indiana Jones flick. We’re treated to giant colorful birds, talking dogs and a villain that is certainly worthy of the title. Oh and is this movie funny! There are sequences in which you may find yourself not being able to hear the dialogue because you or those around you will be laughing so hard.

And you all know this going it, but “Up” has brilliant animation. I seriously believe we’re looking at the next Oscar winner for Best Animated Feature (and hopefully a best original screenplay nod). I didn’t see the film in 3D because I wanted to take in the gorgeous animation first, but I will be checking the 3D version soon. You’ll definitely want to see “Up” more than once because once just isn’t enough when it comes to Pixar. GRADE: A