Dr. Loomis: Or How I Learned to Stop Worrying and Love “Halloween” 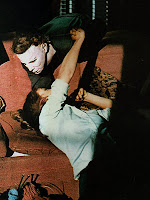 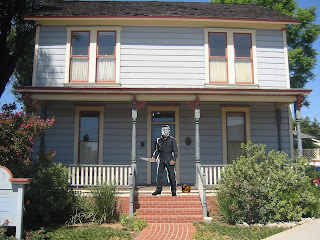 With just about three months to go until Rob Zombie's next chapter in his Halloween reboot, I've decided to go back to the beginning and figure out just how John Carpenter's original slasher classic "Halloween" became my fourth favorite film of all time and the definitive American movie from the 1970s (sorry Mr. Corleone but you got nothing on Michael Myers). Look I've even seen the Myers house in person --->

I can remember it so clearly. I was at my grandparents’ house. It was someone’s birthday. My grandma? My grandpa? My uncle? Who knows? It was a family celebration that would forever change my life. Most family get-togethers revolved around the TV set. My parents would hang out with the adults while my sister and I would retire to the television. We had finished watching a movie, of which I can’t remember, and the spot on the TV announced the next movie coming up was “Halloween.” “Uncle Georgie!” I cried at the ripe old age of about 9 or 10, “Halloween is on next!” My uncle insisted it was a great movie and that I watch it. I’m not really sure what he was thinking, but I was never against a solid film recommendation at that age and so I watched it anyways. I watched and watched. I sat there unglued and yet unflinchingly terrified at what I was actually witnessing. And this was the TV version no less. I remember leaving my grandparents that night still shocked at what I had witnessed. That night, when my mother put me to bed, I, without hesitating, flicked my closet light on, which before that time had never really had any use except for trying to find a good toy to play with. I had Michael Myers on my mind and in my dreams and I was forever a changed human being. There have always been two points in my life: pre-“Halloween” and post-“Halloween.”

I’m not really quite sure why “Halloween” affected me so strongly but I have a few ideas. First off, Michael Myers was and is, to me, the scariest villain I’ve yet to come across in a movie. The mask he chose to steal from the hardware store is simply chilling. I literally couldn’t even look at the mask without getting goose bumps. It didn’t help that director John Carpenter’s simple yet haunting score simply scared the crap out of me. Just hum a few bars and still get the creeps. Like John William’s shark theme from “Jaws,” its simple notes put effortlessly together manage to create a foreboding atmosphere unmatched by nearly any other film composition. Unless of course you count Bernard Herrman’s shower scene music which, along with “Halloween” and “Jaws” are the horror movie score trifecta of terror.

“Halloween” had always been just “the scariest movie I’d ever seen in my entire life.” It now not only stands as of the scariest movies I’ve seen but one of my favorites. It currently ranks as number four on my list of all time favorite films. It sits just behind “Mrs. Doubtfire,” as strange as that seems, but perhaps it’s hard to beat out any film that has won a Best Motion Picture – Musical or Comedy Golden Globe Award. In my opinion, not only is “Halloween” scary but it is a completely well-made and efficient thriller. Carpenter and his co-writer and producer Debra Hill (who also produced my #2 favorite “Adventures in Babysitting”) made the most of their very limited budget. They used the camera in a subjective way that had been used very little up to that point in time. The original “Black Christmas” used the subjective camera many years earlier, but it never quite caught on with American audiences. Carpenter also had a crazy idea to open his film, which included a tour of a small Midwestern suburban house and a murder, all in one take. He ultimately used three takes with well-placed edits, but the entire opening sequence feels like one long and suspenseful take. We are shown a house, a young couple make out and run upstairs to do the nasty nasty. We travel into the house, open a kitchen drawer, pull out a knife, make our way upstairs, put on a clown’s mask and before we know it we are stabbing a naked girl to death. It is revealed just seconds later that we were looking through the eyes of a young boy. We are looking at Michael Myers. The story picks up years later when Michael escapes from a mental institution where he proceeds to stalk one young Laurie Strode ('Sream Queen' Jamie Lee Curtis' big break) and her slutty girlfriends. Michael’s psychologist Dr. Loomis is on his trail and he must stop him before the town of Haddonfield, Illinois becomes a bloodbath.

John Carpenter was a young guy who just wanted to make movies and he succeeded in not only creating one of the most successful independent films of all time, but certainly one of the scariest. You can feel his presence in nearly every frame. He created one of the most evil and memorable and freakiest villains ever put on film and he certainly scared the ever loving crap out of me. For a while, I couldn’t even hear the name “Micheal Myers” without screaming my head off. Needless to say it was a while before I had watched “Halloween” again. It played the next year on TV and I was ballsy enough to tape it. It wasn’t until years and years later when I got my first DVD player that I even watched the theatrical version, in widescreen of course.

“Halloween” has since influenced my entire taste in movies. I prefer a slasher movie (which “Halloween” basically helped to create) over nearly every other genre, although I’m generally non-exclusive and enjoy watching whatever I can get. I love Freddy and Jason and Leatherface, but for me, Michael Myers will always hold a special place in my heart, even if he scared the crap out of me so many years ago. GRADE: A+

Check out the trailer for Halloween 2: