The Chick and the Dead: Alison Lohman Tries to Reverse the Curse in the Fantastic “Drag Me to Hell” 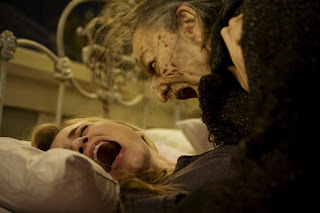 If you see one movie this summer, go see “Star Trek.” If you see two movies this summer, go see “Drag Me to Hell.” Simply put, it’s one of the most ridiculously amazing movies of the year. Cult director Sam Raimi who moved into mainstream success with the “Spider-man” flicks finally goes back to his roots with a campy horror tale of a woman cursed by an evil gypsy woman. The movie is funny, scary and totally outrageous. It is probably one of the most fun times you’ll have at the movies this year and is certainly one of my favorites so far this year.

I enjoy “The Evil Dead” but it’s not one of my favorite movies. The 1982 super-cheap cult horror flick which Raimi made with a bunch of his friends with very little money is still considered his bread and butter. As the years have gone on, he’s made bigger budgeted flicks, but its obvious he’s always had a desire to revisit his campy past. He does that with “Drag Me to Hell,” which is quite possibly one of the best movie titles in the history of cinema. It’s more than a title it’s a promise. A promise from the filmmaker to the viewer that they will see someone onscreen being dragged to hell. Of course, the big question is who exactly.

The flick starts in the 1960s where a young boy has been cursed. His family brings him to a medium who fails at saving the poor boy and he’s… yes dragged to hell. Flash-forward to present day where we meet Christine Brown (Alison Loman) who works as a loan officer at a bank where she’s up for a promotion. Her boss says she’s near the top of the list, but he’s looking for someone who is not afraid to be tough. When an old creepy woman named Mrs. Ganush (exquisitely played by Lorna Raver) comes in to ask for a third extension on her mortgage, Christine sees an opportunity to prove that she can say no when needed. She can’t be a pushover. The woman, who coughs up yellow phlegm, has a discolored iris, and takes out her teeth to eat a treat from Christine’s candy bowl, begins to beg on hands and knees. She’s visibility upset. Then she visits Christine later that night in the parking garage, in of the film’s greatest sequences (hello stapler as weapon!) in which she steals a button off Christine’s coat and curses her. She insists that it will be Christine who will come begging to Mrs. Ganush.

At first the whole curse thing just seems silly to Christine, but then strange things begin happening. Scary shadows, loud noises, you know, standard Exorcist/Poltergeist type stuff. She goes to a fortune teller who, despite a price tag of 60 bucks, insists that Christine has been officially cursed and after three days of torment by an evil demon, she will be dragged to hell for all eternity. What is pretty refreshing to see, first of all, is Christine’s college professor boyfriend Clay (Justin Long) doesn’t really believe her but he continues to support her. He slowly realizes that maybe everything weird going on isn’t exactly just in her head, like when a fly comes into the bedroom at night, and goes down her throat and she proceeds to have a “dream” that the old woman is lying next to her and she proceeds to throw up thousands of mealworms all over her face. Yes this movie is gooey and gross and fantastic. The violence is so over the top you can’t help but laugh at it.

The movie has a certain sense of humor about it and that is due to Sam Raimi (and his co-writer & borther Ivan Raimi) expert balance of humor and horror. They don’t let it get too scary or too funny but they spread out perfect layers as if they’re award winning chefs designing the perfect dessert on Ace of Cakes. They know exactly what they’re doing and what exactly the audience wants to see. And the way they go about it, with traditional horror movie staples such as loud, scary noises, creepy camera angles and stylized editing which all congeal to form a perfect roller coaster ride of frightening fun.

Like I said, the movie is utterly ridiculous (hello goat!) but it’s super fun. It knows exactly what it’s doing and just how to do it. I dare you to argue how this isn’t one of the most original and enjoyable movies to come out this summer. The summer movie season always has one sleeper horror hit and Drag Me to Hell is sure to be that movie. Remember the title is a promise: someone gets dragged to hell, so go see it to find out just who that is. GRADE: oh what the hell, A

Hey -- wait... You said to see "Star Trek" first, yet you graded this an A and Star Trek a B+! Anyway, this looks great -- I definitely want to check it out!

well i'm first to admit that i'm biased when it comes to horror movies vs sci-fi movies. so yeah everyone should see star trek, but everyone should also see drag me to hell!