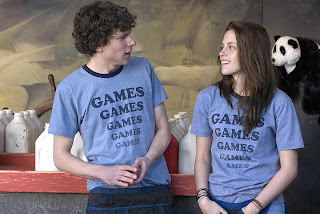 First things first. “Adventureland” is a lot more serious than I thought it would be. It has it’s share of laughs but it’s certainly more thought-provoking and affecting than a movie like this seems the right to have. Maybe I’m just used to comedies just being “comedies” but sometimes they actually reflect real life and have something to say. This is a great movie because it really says something to everyone. We’ve all been there before: trying to get a job after college. We spend our parents’ hard earned dough for four years and then we end up at a job where a college degree is hardly required. Of course some of us land better jobs than others. I’m not so sure how I’d feel if I had to spend my post college summer working the game booths at a lame amusement park in which all the games are fixed so the average consumer can’t even win a coveted giant panda bear. “Adventureland” is about a young guy who must take on a crappy job even though he’s been accepted into grad school and his journey to discover himself.

Jesse Eisenberg (The Squid & the Whale) plays James who has just graduated from college. He’s an intellectual type. He’s had relationships but never any real physical contact with the opposite sex. He’s sort of a nerd, but a cool nerd. He had plans to spend the summer traveling through Europe, but his parents can’t afford to help him with financial needs. Therefore before starting grad school in the fall, he must accept a summer job: a game booth operator at Adventureland. Adventureland is operated by the film’s main comic relief Bobby and Paulette (Bill Hader and Kristen Wiig) who like the cops in “Superbad” sort of seem like they’re in a different movie, but are still funny nonetheless. James hesitantly accepts the job where he meets a cute girl named Em (Kristen Stewart) and an even nerdier kid Joel who can’t seem to shake the anti-Semitism he sees in his crush Sue (Paige Howard, daughter of Ron).

One of the main perks of Adventureland is it’s setting. Yeah I mentioned the park is a sketchy amusement park, but it is the summer of 1987 and many of your favorite 80s bands make an appearance on the film’s soundtrack. Director Greg Motolla (who also wrote the screenplay which is apparently based on his own experiences) actually does a great job of creating period detail. He doesn’t just throw 80s pop culture references down you throat just for the sake of it (like in The Wedding Singer). And he creates relatable characters in realistic situations. It sort of fun watching all these co-workers bond since they share similar hobbies (drinking, smoking pot etc) and they all share a horrible job run by a pair of hilarious loons.

The film doesn’t try to be overly sentimental or corny but actually hits all the right notes. You feel the frustration in James because he knows the last job he should be working is at a place like Adventureland and he’s really in love with Em. By the end of the movie you’re certainly rooting for him to get what he wants and it’s enjoyable watching his summer journey. Those expecting a complete laugh riot will probably be disappointed, which in a way, I sort of was, but looking back it’s pretty amazing how just plain enjoyable watching “Adventureland” is. It may not be high class cinema but it deals with real life issues, realistic people and is a fun nostalgic look back to a time when we think we should be conquering the world and just end up with broken dreams and wage slave salaries. GRADE: B

Hi! This is my first visit to your blog! We are a team of volunteers and starting a new project in a community in the same niche.
Your blog provided us valuable information to work on. You have done a wonderful job!

Excellent way of telling, and fastidious paragraph to take facts about my presentation subject, which i am
going to present apartments in westwood pqa (Gtsopour.Blogspot.fr) university.