The Price is Right: Michael Moore’s At It Again with “Capitalism: A Love Story” 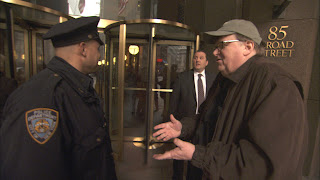 I’m going to get this out of the way right now. My knowledge of capitalism is limited to that when I go to Best Buy to buy movies that is capitalism. You see I was a Communications major in college and instead of being productive and taking, oh I don’t know, a useful class like Economy I was busy taking The Cinema of Alfred Hitchcock. Not that you can’t learn a lot from the movies. And that brings me to what this review is about. Everyone’s (and by everyone I mean liberals) favorite muckraker Michael Moore’s latest film is about how capitalism in our American society is evil and how it benefits the rich (ie corporations) and negatively affects the poor (ie Hurricane Katrina victims). Say what you want about Moore he makes entertaining movies.

Of course taking his side always makes his movies more entertaining. And since I’m mostly on his side. (I wouldn’t call myself a Michael Moore fanatic by any means, but I find the information in his films to be interesting and of importance, although I know that it’s not always 100% the truth). I enjoyed “Capitalism A Love Story” mostly because he uses lots of vintage film clips, memorable music scores and oodles of stock footage. The opening credits of the film show various bank robbers caught on security cameras. Its pretty cool that he can make a statement so quickly without saying a word. I gather that he’s going to proclaim capitalism as an evil thing that makes people resort to robbery as a means of minimalist survival. I think I’m right.

The usual Michael Moore antics are firmly in place. As the film progresses he shows how the corporations received so much bailout money to help the ailing economy and yet these people in high up positions used the money to give their executives bonuses. We’d like our money back please. Moore storms the various banks’ headquarters in New York City where he’s confronted by security guards (who are probably only making minimum wage anyways). Moore uses humor to make a lot of his points and that’s a good thing. Humor is something that makes us human and if we can laugh at a serious situation maybe more people would be willing to listen. I mean his last film, Sicko, which dealt with the health care crisis in this country was one of his funniest films and yet it had touching moments that brought tears to your eyes. The same thing here.

Moore interviews many people. There are people whose homes were pretty much stolen away from them by their banks because they couldn’t afford their mortgage payments. I am not a homeowner but I know that foreclosure is not a word you want to hear. He even talks about how major companies take out life insurance policies on its employees so that when they die, the company makes thousands or even millions of dollars. (Don’t believe me? Go to http://www.deadpeasants.biz/) That’s messed up if you ask me. Moore gives us the ins and outs of capitalism and how it has changed throughout US history. It seemed to be working just fine after World War II and he basically blames Ronald Regan for everything that has happened economically through today. At least he has confidence that our new president Barack Obama will help out and bring the necessary changes to our failing financial system.

“Capitalism: A Love Story” is a funny film and it’s a sad film. And I would call it an important film. I don’t care what side of the political fence you are on or whether you can for Michael Moore’s silly tricks. This guy is a filmmaker first and foremost and continues to makes some of the most interesting and entertaining documentaries out there. Love him or hate him Moore is never boring. “Capitalism” doesn’t come close to reaching the power and importance of his masterpiece “Bowling for Columbine” but it’s a relevant film that dares to ask the tough questions. Help stimulate the economy and see it. GRADE: B