Liar Liar: Ricky Gervais Can’t Handle the Truth in “The Invention of Lying” 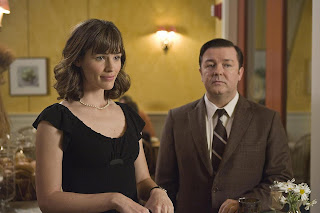 “The Invention of Lying” is probably one of the more intelligent and socially aware comedies you’re likely to see this year. The film takes place in a world where no one has developed the ability to tell a lie. Everything anyone says is the truth. There is no modesty or flattery. People can’t even make up stories, which means that when you go to a movie in this world, you end up watching a lecture about some fragment of history. People are completely blunt in this world. If a woman thinks a man is ugly she tell him to his face. If a man thinks a woman is fat he’ll tell her to her face. Of course, for Mark Bellison (a Ricky Gervais-type character played by Ricky Gervais) this is not the ideal way to live and one day he figures out that if he says something that is not true, anyone will believe it.

The film opens up as Mark is meeting Anna (Jennifer Garner, who’s wonderful here) for a blind date. She’s frank with him and says it took her a while to open the front door because she was, uh, playing with herself. She also says that she’s not really into Mark and thinks he’s not attractive and that he’s fat. Later on at the dinner table she talks to her mother on the phone and says that she won’t be sleeping with Mark after dinner. She says she has no interest in him romantically because she needs an attractive man with good genes to have children with. Pretty blunt right?

The next day at work Mark’s secretary (Tina Fey) informs him that he’s going to get fired. Mark works for Lecture Films where he “writes movies” about historical events. Of course he gets the boring century of the 1300s where not much exciting happened. His jerk co-worker Brad played by a perfectly cast Rob Lowe frankly says how much Mark’s movies suck. And on top of it, it turns out Mark does get fired. And now he wont have money for rent, so his landlord says if he doesn’t give him $800 for rent, he’ll be thrown out.

Mark goes to the bank to withdraw all that he has left from his savings account, which is only $300. The teller informs him that their computers are down and that if he knows how much is in his account she’ll just give him the money. Somewhere in his brain synapses start firing and he blurts out $800. The computers come right back up and even though it says there’s only $300 in his account the teller takes his lie for the truth and hands over all the dough. Mark instantly sees this as the opportunity of a lifetime and even tests his new invention by telling a complete stranger on the street that if she doesn’t have sex with him right away the world is going to end.

“The Invention of Lying,” which was co-written and co-directed by Gervais and Matthew Robinson, is one of those high concept comedies that start off as silly and funny and actually end up being pretty profound and intelligent. And in fact they make a pretty bold statement in the film because in this world of the truth, there is no religion. When Mark’s mother is sick in the hospital, the nurses and doctors overhear him telling her that if she dies there’s a wonderful world waiting for her and the next day Mark becomes a Jesus-like figure where pretty much the entire human race wants to know what happens after you die. A scene, in which he reveals ten truths told to him by some guy in the sky, is played wonderfully. It’s something you just have to see.
“The Invention of Lying” is a smart comedy that is funny and pretty profound. It has a lot to say without ever sounding preachy and it has romantic elements without ever being cheesy and it has funny scenes without ever seeming desperate for a laugh. Gervais was tailor-made for this role and if you’re a big fan of his you’d be doing yourself a favor by seeing this film. And that’s the truth. GRADE: B+