Make Room for Daddy: “The Stepfather” Remake is a Competent Enough Thriller 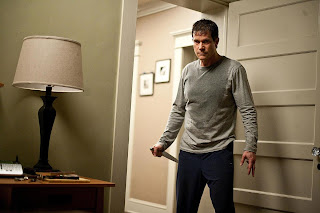 “The Stepfather” is not a very original movie. Of course it doesn’t help that it’s based on a little-seen 1987 thriller of the same name about a murderous man (played superbly by Lost’s Terry O’Quinn) who seeks out widows and divorcees and is willing to kill in order to form the “perfect family” (The movie was based on mass murderer John List who killed his entire family and fled and wasn't caught until eighteen years later). The first film was a product of it’s time. The Regan Era was in full swing. Things were more conservative and there was this ideal family life that many people strived for. And here came this little suspense flick about a guy who goes around killing his own family when they don’t live up to his perfect standards of living. Times have changed a lot in twenty two years and while divorce rates are at an all time high and the idea of “marriage” is being questioned everyday, I’m not sure this new “Stepfather” has much to say. But it is a fun little movie that is breezy, easily digestible and fun.

We’re introduced to a bearded man who appears to be changing his physical appearance in front of the bathroom mirror. He takes a shower, puts on a suit goes down stairs and makes himself some breakfast and walks out the front door with his luggage. Oh and there is a murdered woman and children laying on the floor. This guy, now known as David Harris (Dylan Walsh from TV’s “Nip/Tuck”) makes a move on divorcee Susan Harding (Sela Ward). Susan has three kids and has had a rocky divorce. Six months later she’s in love with David and they’re engaged to be married. Susan’s oldest and troublemaker son Michael (Penn Badgley from TV’s “Gossip Girl’) who has returned from his stint at a military school is a little suspicious of his mom’s new love interest. Of course David seems like the ideal father. He loves his wife and her kids and can’t wait to be a truly close family. Except for the fact that his a murdering psychopath.

Most of the film’s suspense comes from David’s attempts to make sure no one finds out his real identity. Everyone seems suspicious including a noisy cat lady neighbor, Susan’s ex-husband and even her own sister, whom David works for at her real estate business. When he refuses to give her his personal information for payroll, he up and quits because he says that the job’s not suited to him. The crazy cat lady tries to warn Susan because she thinks he looks like a guy she saw on America’s Most Wanted. Let’s just say she ends up at the bottom of her basement steps.

Anyone who’s iffy about seeing this movie because of its PG-13 rating should be told that while the film doesn’t really feature much graphic violence (and neither did the original R-rated film, save for a few bloody moments) it does have some brutal moments that are surely inappropriate for 13 year olds. I still think that it seems crazy to rate any movie that features a serial murder PG-13, but I realize the dreaded R rating vastly limits the film’s audience. I wouldn’t call this a “watered down” version of the original the way the recent and dreadful “Prom Night” was. That film was directed by Nelson McCormick who also helmed this new film. McCormick makes writer J.S. Cardone’s script work for the most part, but it’s riddled with things you’ve seen before and characters do things because the script says they should and not because someone would do them in real life.

Like the original “stepfather” the film’s main draw is in its lead performance. I enjoyed seeing Walsh breakout from his role as Sean McNamara on Nip/Tuck. He plays nice really well and he plays psychotic really well. It was a fun Jekyll and Hyde-type performance that was probably better than a film like this really deserves. He was charming when he needed to be and creepy when he needed to be. Good job.

There are much better films than “The Stepfather” and yet there are much worse films. I think this falls somewhere in the middle. Anyone who’s seen the first film (which was finally released for the first time on DVD on October 19th) should check that out watch this new one if they’re intrigued. If you want to be really scared at the movies you should see “Paranormal Activity” but if you want something lighter but still fun, do daddy proud and see “The Stepfather.” GRADE: B