Brain Food: “Zombieland” is a Smart and Amusing Zombie Comedy 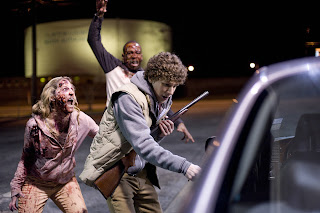 Let’s get the comparisons out of the way first. “Zombieland” can easily be written off as a dumbed-down, pop culture savvy reworking of England’s “Shaun of the Dead.” “Shaun of the Dead” worked so well because it was really able to find a great tone between horror and comedy and saw the comical potential when it came to zombies. “zombieland” while yes technically a comedy with zombies, is nothing like “Shaun of the Dead” in style or execution. It finds its own groove and it is clever and humorous and a complete joy to sit through (as joyous as a movie with gory zombie violence can be).

“Zombieland” takes place, I believe, in the present day world. A horrible virus has broken out which turns people into scary, ravaging beasts in search of human flesh. And like all zombie mythology, if you’re bitten you’ll become one as well. Most of the human population has died off and the world is pretty much a vast wasteland. There are abandoned vehicles and homes all over. Grocery stores are empty except for the random food items not claimed by survivors.

We’re introduced to Columbus (played by always reliably awkward Jesse Eisneberg) who’s a young college student from Ohio. He’s never really been too close with his family, but after the outbreak started he decided to travel back home to see whether his parents are zombie-free. So he’s on the road all by himself and he’s created a set of rules for surviving in Zombieland. One rule for instance, is cardio. You must be fit and quick as it’s the slow, obese people who were wiped out first. Another rules is to beware of bathrooms, because the zombies always seem to attack when you’re most vulnerable. He makes a new rule when he meets up with roughneck Tallahassee (a wonderful Woody Harrelson). He’s from Florida (If you haven’t figured out by now, the characters refer to themselves as the place where they’re from, pretty ingenious). Tallahassee, while reluctant to team up with this young geeky kid, teaches him how to enjoy the little things in life (ie: Twinkies).

These two guys soon meet up with a pair of equally tough sisters played by Emma Stone and Abigail Breslin. These girls are hard asses and though Tallahasse and Columbus for a loop when they con them into stealing their vehicle and weapons. The weapons consist of the likes of hedge clippers and pickaxes and baseball bats. Eventually this strange foursome bands together in the hopes of riding out the zombie epidemic and trying desperately to survive. Part of this plan includes holding up in a mansion owned by a celebrity of which I will not name (just go to imdb, you cheater). This sequence contains probably one of the best cameos of recent memory and not just because of who this person is, but how writers Rhett Reese and Paul Wernick handle it.

And this brings me to the fact that these two writers, who haven’t really done too much and first time feature director Ruben Fleischer have crafted a remarkable enjoyable and smart movie. This is a flick that finds just the right tone. It’s scary when it needs to be scary and funny when it needs to be funny. It even has some heart. Will the viriginal Columbus core with Emma Stone’s Wichita? You’ll have to see it to find out. And like all well-made comedies, it has its brain right where it should be. This is not a movie you have to turn your mind off to enjoy. Look at the way Fleischer incorporates Columbus survival rules into the film. It’s well done and hilarious.

“Zombieland” was an extremely pleasant surprise. It comes just at the perfect moment in time. In this day and age with the state of things politically and economically, it’s great to just get away. But it’s even better to escape into an “escapist” movie that isn’t just dumb. It’s smart and entertaining. Zombieland is a kick-ass ride. GRADE: A-