In the Bedroom: If You Don’t Want to Be Scared Don’t See “Paranormal Activity” 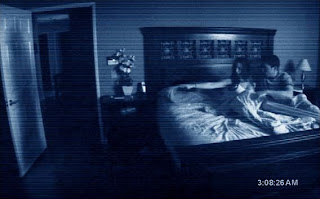 “Paranormal Activity” is a hyped movie that is actually worth being hyped. I’m going to be honest and say that I seriously had trouble sleeping the night after seeing this movie. Every time I woke up during the night it was difficult to fall back to sleep. There are so many stark and disturbing images in “Paranormal Activity” they’re most likely going to stay with you for days. I’m sure by now you’ve seen all the ads for this movie which have been touting that you should DEMAND IT to be shown in your local multiplex. It’s a cheaply (it cost $11,000) yet expertly made horror flick with an unusual marketing strategy. Paramount who bought the distribution rights said if the film’s website reached one million demands it would release the film nationwide. It was a marketing ploy that was unique, pretentious and dare I say ingenious.

“Paranormal Activity” is really scary. It’s being compared mostly to “the Blair Witch Project” because it’s shot by the actors with Hi-Def video cameras in a low budget, cinéma vérité style. You know what that means? Shaky cinematography that will most likely make those who puked during “Blair Witch” do the same here. Of course there have been plenty of films like it since the 1999 horror phenom ("Cloverfield," "Quarantine"), so we should all be used to this type of film by now. Also, this new film doesn’t tout the movie as being based on any true story and doesn’t dupe you into thinking it’s real. That was Blair Witch’s trick. There are no credits in “Paranormal Activity.” Not even end credits. It’s a bizarre move that works for this film.

So what the heck is this must see flick all about anyways? We’re introduced to a young couple. There’s Micah (Micha Sloat) and Katie (Katie Featherston) who have been together for about three years and have just moved into a nice, modern-looking home. It’s not a creepy place at all. They’ve been noticing some strange disturbances in the house and therefore Micah makes the decision to buy a fancy camera to try to capture any paranormal activity. Like I said the film is the footage that is shot mostly by Micah and some instances Katie. It turns out Katie has had paranormal incidents happen to her throughout her life and that whatever it is roaming their house at night is after her. They invite a psychic over (Mark Fredrichs) who deals with ghosts but isn’t prepared for what he believes is a demonic presence in the home. Katie is scared and gets more scared as the film goes on. Micah, being the typical alpha male, feels the need to protect Katie. That’s all fine and dandy, but you certainly don’t want to piss off a demon.

The film builds and builds and builds. It piles dread on top of dread. It’s claustrophobic (the movie never leaves the house) and creepy. The film alternates between what I call the “daytime scenes” in which Micah and Katie discuss the goings on and we seem them interact as a couple in distress, and the “nighttime scenes” in which we see footage of Micah and Katie sleeping. Micah has set up a tripod and set his camera to record in night vision throughout the night. These are where the film really grabs a hold of you. Each evening something stranger and more disturbing happens, which I refuse to describe for you. Let’s just say things start to escalate tremendously as the film progresses. I believe this couple as real people. The acting is as good as a film like this requires. They seem like real people. They do things real people would do. They do smart things and they do really stupid things.

I said the film was made for about $11,000. There are no real special effects, which is surprising because the film does show much than “Blair Witch” project and yet it remains totally believable and realistic and that’s why the film is so powerful. According to imdb fourteen people worked on the film (not including the handful of actors who appear in the movie). The director Oren Peli also produced, wrote and edited the film. There is no music; the film’s scary sound design is the score. You will see images that will stay in your head for a while.

“Paranormal Activity” is a haunting film that is a guaranteed fright. I’d be lying if I said at least one part literally made me jump out of my seat. And I’m not talking about the hairy spider that makes a brief cameo. This is an innovative and smart film that deserves to be seen, if you dare. GRADE: A-