The Return of the King: James Cameron Achieves a Titanic Achievement with “Avatar” 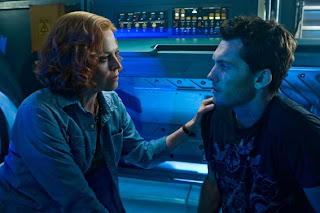 “Avatar” is not “Smurfs in Space” as some naysayers would like to call it. It’s actually a very well orchestrated fantasy epic (with lots of flying and some magic) that James Cameron fans have been waiting for. Sure people will spot references to other movies including like “Pocahontas,” “Ferngully,” “The Matrix” and “Dances with Wolves” but “Avatar” blows those movies out of the water. Cameron manages to juggle top notch performances, wildly imaginative settings, relatable characters, and realist computer generated imagery into one big action adventure that is a grand achievement. Those who hate to see it happen will be shocked when it racks up a bunch of Academy Award nominations next month.

Finally we have a film that uses state of the motion capture technology that actually feels and looks like real people. The story takes place in the future on the distant planet Pandora (or is it a moon?) where a tribe of 10 foot tall, people-like aliens live in the forest like a long lost Native American tribe. These humanoids are called the Na’vi. Humans see them as the bad guys simply because they’re thought of as “savages.” The humans want to harvest the land since Earth is dying out and its up to a paraplegic marine to infiltrate the group and find out all he can about them.

The Na’vi are shown as CGI images courtsy of the booming motion capture technology that have been used in films ranging from “The Polar Express” to the “King Kong” remake. Real actors act out scenes with lots of dots all over their bodies and then super computer wizards turn their recorded performances into realist CGI creations. In the film, Pandora is home to a toxic gas so humans have invented a way to use “avatars” to live in this world. Na’vi DNA is mixed with human DNA to clone human/Na’vi hybrid bodies. And then the human can link up to the “avatar” body and live as if the avatar were their body. It’s actually a pretty neat concept Cameron has come up with.

Australian born Sam Worthington, who was last seen in this summer’s Terminator Salvation, plays Jake Sully a crippled marine who is brought to Pandora after his brother dies. He’s there to help a group of scientists learn more about the Na’vi people lead by Dr. Grace Augustine (a wonderful Sigourney Weaver). She sort becomes Jakes mentor has he first becomes used to his avatar body. He’s soon separately from his team and saved by a female member of the Na’vi tribe named Neytiri (Star Trek’s Zoe Saldana). Neytiri introduces Jake to her people including her leader father and mother. He soons learns all about the Na’vi and how they are a kind and peaceful race and not the savages that evil corporate leader Parker Selfridge (Giovanni Ribisi) insists they are. I was actually surprised at how much I connected with the Neytiri character and I think much of it had to do with Zoe’s wonderful performance (while the Na’vi are CGI images the motion capture is simply astonishingly realistic).

For once I actually feel like I want to praise a film that uses more CGI than is probably necessary, but James Cameron uses it wonderfully throughout the entire film. He creates beautiful and vast landscapes and Pandora is a lush, green environment in which the Na’vi people are indebted to. Their “Tree of Souls" is practically their life force. Sure Cameron makes obvious environmental messages but those are important messages in a time when we need them most. I also enjoyed the emotional weight that was brought to the film by way of Cameron’s script. You still there for 160 minutes and becomes so emotionally invested I’d be surprised if you don’t get emotional at least once throughout the film. I mean this guy made “Titanic” after all. And every stunning image that Cameron comes up with matches beautifully with James Horner's majestic score.

For all the bells and whistles (and lots and lots of money) that “Avatar” contains I really do believe it’s a moving and exhilarating film worth seeing. The 3D is pretty cool and yet I’m sure it will play just as well on regular 2D screens because the visuals alone are beautiful whatever dimension they’re in. James Cameron simply has done it again and I wouldn’t be surprised if he still insisted on referring to himself as King of the World. GRADE: A-