Thank You for Croaking: Disney Returns Gloriously to Form with “The Princess and the Frog” 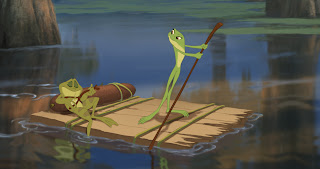 Has it really been ten years since the last really great Disney (non-Pixar) animated film was released? Sure there have been some mild successes like “Lilo & Stitch” and “The Emperor’s New Groove” but the last classic was definitely 1999’s “Tarzan.” Yet even then it seemed like Disney just wasn’t quite on the creative kick it once was during its heyday of “Beauty & the Beast” and “The Lion King” or my personal favorite “The Little Mermaid.” Those who love these films will most likely squeal like a child for “The Princess and the Frog” a wonderful Broadway-style animated musical featuring jazzy Randy Newman songs and beautiful hand drawn 2D animation.

Loosley based on "The Frog Prince," this story takes place in 1920s New Orleans where we’re introduced to a poor Black waitress named Tiana (voiced beautifully by Anika Noni Rose). Like any Disney heroine she has a dream. Her dream is to open a fancy restaurant featuring her late father’s scrumptious gumbo recipe. Even her mother, who’s voiced by Oprah, can’t even give her the money to help fulfill her dream. Neither can her insatiable, yet lovable childhood friend Charlotte (Jennifer Cody) who acts like a princess but is not one. Luckily the dashing Prince Naveen (Bruno Campos) is in town looking for someone to marry. It turns out his rich parents have cut him off and he’s actually looking for a rich princess. He’s turned into a frog by the local bad guy/trademark Disney Villain Dr. Facilier’s (Keith David) voodoo spell and he needs to kiss a princess to turn back into human form. In a traditional mistaken identity story point Naveen thinks Tiana is a princess during a costume ball and entices her to kiss him. It doesn’t turn him human, but turns her into a frog. Then the two frogs start a wonderful “Wizard of Oz” type adventure featuring fantastic musical numbers to find Mama Odie (Jenifer Lewis) who may be the only one who can help them.

“The Princess and the Frog” feels like all the great elements of traditional Disney films all thrown in for good measure and yet it still feels wholly original. Since most of the film is set in New Orleans’ French Quarter and the swampy bayous the score by Randy Newman is appropriately jazzy. I’ve never really thought of Randy Newman as a very original composer (all of his scores pretty much sound the same) but the actual songs he’s written for the film are all fun, catchy and entertaining. Even directors Ron Clements and John Musker who previously collaborated on movies like “The Little Mermaid” and “Aladdin” seem to find a comfort in what has come before and yet manage to make this story fun and timeless (and a surprisingly beautiful ode to The Big Easy). There are the standard fairy tale elements like wishing upon a star and Disney’s “single parent syndrome” but it all works and feels appropriately magical. And let’s not forget the funny sidekick characters who we get here as Louis the trumpeting alligator (Michael-Leon Wooley) and Ray the love struck firefly (Jim Cummings) who is probably the most endearing sidekick Disney character since Sebastian in “The Little Mermaid.” And no great Disney movie would be a success without an appropriately entertaining and evil villain. Dr. Facilier and his Tim Burton-inspired “Shadow Man” are equally creepy and mesmerizing.

Hopefully “The Princess and the Frog” will be this generation’s “The Little Mermaid.” I don’t mean to compare them (I definitely don’t think it’s better, but it could definitely sit along side it) but it’s my fervent hope that this film will generate enough audience interest to think fondly of the old school style of feature animation that was so popular in the 90s. I’d like to think the recent live action/animation homage “Enchanted,” staring a wide-eyed Amy Adams, helped boost an interest in these types of films. These are movies that can be so universally loved whether you’re a child or an adult, male or female and a revival of classic animation is extremely well deserved and warranted. Can’t traditional animation co-exist with its CGI brethren? Only time will tell. GRADE: A-