Fired Up: “Up in the Air” is So Good It’s on an Entirely Different Plane 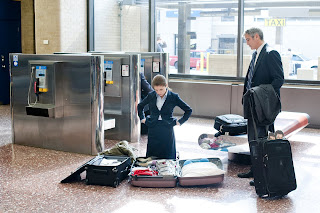 Get it? Up in the Air is so good it’s on an entirely different plane. Cause it’s about a guy who basically spends his entire year traveling on airplanes. And a plane is also defined as a “level surface.” You’re still with me right? So I’m getting a little off subject and I don’t really know why. I could start off this review and tell you to rush out now to see “Up in the Air,” Jason Reitman’s wonderful follow up to his big hit “Juno” but I’m not going to. I’m not going to overly gush about this movie because I want you to see it with as little expectations as possible. Everything about this movie is really good. The acting is good, the story is good, the writing is good, the directing is good. It’s not earth shattering and it probably won’t change your life, but that’s entirely ok.

“Up in the Air” tells the story of Ryan Bingham (a George Clooney-type played by George Clooney) who works for a company who other companies hire to fire their employees. He’s a downsizer. He travels mostly by airplane and spends most of his life up in the air, in fancy hotels or classy airport lounges. He likes it this way. He’s not close with his two sisters, one of whom is about to be married. He has no real home. He does have a home, but spends less than a month there a year. He has a goal: to achieve 10 million in-flight miles. If he accomplishes it he’d be only the seventh person to do so. Its an elite club to be a member of, but what exactly is the cost?

Remember I said Ryan fires people. He, a complete stranger, will sit down one on one with an employee look them directly in the eye and tell him or her that their position has been eliminated and that they will no longer be working for their company. No one wants to get fired and the look of devastation on these peoples’ faces is mind numbingly depressing. Ryan is the hero of this story even though he’s technically one of the least likeable type of people. He’s chatty and easy going. His life is structured. He has routines. He knows what he’s doing and he’s good at it. He’s confident. That is until his company decides to change its plans and eliminate its employees from flying around the country and firing people in person. They’ve decided to cut costs and fire people over a webcam. Tough break for a guy who has no real home and is trying to get 10 million frequent flyer miles.

“Up in the Air," based on the novel by Walter Kirn, is written (and co-written by Sheldon Turner) and directed by Jason Reitman, who all showed his budding talent with “Thank You for Smoking” and then completely broke out into the mainstream with one of the best films of 2007: “Juno.” He even did an almost incredible feat: he was nominated for Best Director for directing a comedy. This guy is freaking talented. The film is hitting at the perfect time which makes it so relevant for the world we live in. If you hadn’t noticed, our economy is weak and people are losing their jobs left and right. Reitman dares us to sympathize with a character who is easily pretty dislikable. And then he introduces us to Natalie (a wonderful Anna Kendrick) who is a recent college grad who is in charge of transitioning Ryan and his co-workers in their new form of communication. She joins Ryan on the road to see the complete ins and outs of what he does best. She learns a lot along the way and she just might not be as cut out for the job as she thought. In fact, her character is probably the most identifiable. She’s completely confident at the beginning. Just look at the way she presents herself in her look and wardrobe. Watch her completely unravel as the film progresses. Reitman also introduces us to Alex (Vera Farmiga), a busy business woman who Ryan meets several times throughout his travels. They have romantic liaisons but Ryan doesn’t quite know her as well as he thinks he does.

“Up in the Air” is a classy, contemporary all around great film (and it’s funny too!) that features terrific performances, a top notch screenplay and assured and confident direction from Reitman. It’s sure to be a significant film when it comes to this year’s Oscar race. It really feels like one of the first films I’ve seen this year that feels like it can stand among the Oscar’s elite group of best picture contenders (although my heart still lies with the wonderful ‘500 Days of Summer’). Whether it gets nominated or not “Up in the Air” is highly recommended. GRADE: A

Write more, thats all I have to say. Literally, it seems as though you relied
on the video to make your point. You obviously know
what youre talking about, why waste your intelligence on just posting videos to your weblog when you could be giving us
something informative to read?

Look at my web site Free After Effects Templates