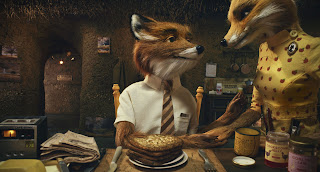 I wasn’t thrilled about “Fantastic Mr. Fox" when I first saw the trailer and sort of shrugged it off. Wes Anderson is an auteur, yes, but I’m not so sure I really get him. His film “The Royal Tenenbaums” is excellent, but it took a few viewings for me to really feel that way. I will say that I wouldn’t necessarily think that Mr. Anderson and a stop motion animated kid’s movie would work, but it strangely does. It’s definitely more for grown ups (although it’s certainly child-appropriate). I’m sure if I was ten pretty much everything would be over my head and I’d be bored to death. But as an adult I found “Fantastic Mr. Fox” to be pretty fantastic indeed.

If you’re at all curious about Fantastic Mr. Fox but you’re not quite sure if you’re game answer these two questions: are you a Wes Anderson fan? And are you a fan of all types of animation? If you answered yes to either of those questions then you’re bound to love this movie. I’m not even really sure if I’d answer yes to the second question, but there is something fun and eccentric enough about “Fantastic Mr. Fox” that makes it worth while. Based on the book by Roald Dahl, the film stars George Clooney as the voice of Mr. Fox, who is sly, cunning and charming. He used to make a living stealing farmers’ chickens but his wife Mrs. Fox (Meryl Streep) insists that he pick a less dangerous career now that they have a son Ash (Jason Schwartzman).

Of course you can’t keep a good fox down and he insists on infiltrating three farmers’ farms. He enlists his friend Kylie (Wally Wolodarsky) and Badger (Billy Murray) to help him. Meanwhile Mr. Fox’s nephew comes to stay with the family while his father is sick. Ash, a pretty socially awkward and strange young fox, clashes instantly with his more outgoing and athletic cousin Kristofferson (Eric Anderson). Ash and Kristofferson’s awkward and sometimes hilarious exchanges were probably my favorite aspect of the film. Anderson, who co-wrote the screenplay with “The Squid & the Whale” helmer Noah Baumbach, certainly knows family tension well (hello, what do you think The Royal Tenenbaums was about?) and makes them wonderfully entertaining supporting characters.

The animation is bizarre yet beautiful. I can’t help but say that the film’s look isn’t quite as polished as one might assume an animated film released in 2009 would look. There is no obviously computer trickery here. This looks like it could have easily been made right after the Rudolph the Red Nosed Reindeer holiday special. That is the nostalgic look Anderson goes for and I think that’s pretty cool. What the film lacks in slickness it makes up for in utter fascinating detail (love those cotton ball-as-smoke explosions). I’d like to see this make the short list for Best Animated Feature at this year’s Oscars and I believe it has a good shot.

“Fantastic Mr. Fox” proves that even auteurs who are known for making quirky films for adults can make equally quirky films for children. This applies to Spike Jonze as well who made the even better “Where the Wild Things Are.” I’m not so sure I would necessarily recommend “Fantastic Mr. Fox” to all the families out there with little children, but those who enjoy film and the unusual movies that come out of some of the strangest minds working in Hollywood today would be doing themselves a favor by checking out “Fantastic Mr. Fox.” GRADE: B

Pretty nice post. I just stumbled upon your weblog and wanted to
say that I've truly enjoyed surfing around your blog posts.
After all I'll be subscribing to your feed and I hope you write again very soon!

Feel free to surf to my blog; ขายกระเป๋า

Hopefully today's fun, very interesting article sekalali to read and may be useful for everything