Monster Bash: Spike Jonze Captures the Innocence of Childhood in “Where the Wild Things Are” 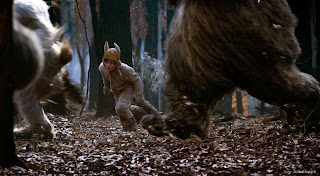 “Where the Wild Things Are” is director Spike Jonze’s first film since he made the brilliant Adaptation. back in 2002 and only his third overall feature. Few film directors have established such a wonderful cinematic style in such few films. Jonze makes a family appropriate film made for adults about a lonely yet wild boy who wanders off to a place where he imagines he’s the ruler of land of hairy beasts. The beasts don’t eat him but rather the king of land. This isn’t the first time this year we’ve gotten a family-friendly story about a young child with a strong imagination. You can make comparisons to the stop-motion flick “Coraline” which itself was a sort of reworking of an Alice in Wonderland type story. It featured a lot of imagination but little emotional payoff. “Where the Wild Things Are” delivers both in spades.

One thing we can notice about “Where the Wild Things Are” right off the bat is how it’s told pretty much exclusively from a child’s point of view. The shakey camera is more than to invoke possible nausea from those who are prone to that sort of thing, but rather to reflect the rambunctious personality of our main character Max (wonderfully played by Max Records who for some reason seems like he could be Ellen Page’s younger brother). We open with him in his wolf costume roughhousing with his dog. Look at how Jonze never really places his camera much higher than Max. We get lots of low angles. We’re always looking up. And see how all the adult characters are credited as Mom (Catherine Keener) and the Boyfriend (Mark Ruffalo) and the Teacher (Steve Mouzakis).

Max is a lonely little boy who feels left out especially when his sister’s friends crush the snow fort he spent so much time building. In one of his animalistic tantrums he bites his mother and runs off where he gets into a boat and sails off to find adventure. He soon comes across a group of monsters the “wild things” of the title whom he befriends. The group is made up of a few very distinct personalities. We get Carol (voiced by James Gandolfini), Ira (Forest Whitaker), Judith (Catherine O’Hara), Douglas (Chris Cooper), Alexander (Paul Dano), The Bull (Michael Berry Jr.) and KW (Lauren Ambrose). It’s actually pretty fascinating how well cast these voice actors are. They nail their characters perfectly. The beasts look to be the traditional “guy in a suit” style with a fascinating combo of animatronics and CGI. Jim Henson’s Creature Shop did an awesome job as always.

It’s interesting how Max stumbles upon these creatures and we, like him, don’t quite know what their deal is. Are they mean? Are they nice? Where do they come from? We quickly learn they’re mostly friendly although a few of them had expressed interest in eating little Max. Having read the children’s book way back in second grade, I was pretty sure that wasn’t happening. There seems to be some tension amongst the group mostly between Carol and KW. We get to learn their story and even Max learns that everyone has problems whether you’re human or a wild animal living in the woods. Yeah we get a “message” that has a lot to do with family but Jonze (who co-wrote with Away We Go scribe Dave Eggers) doesn’t force any sappy message down our throats. And a lot of time the creatures expressive faces tell us all we need to know.

“Where the Wild Things Are” is a beautiful film and made me yearn to be a child again. It achieves an intimacy yet it feels large than life. It’s punctuated with wonderful songs provided by Karen Orzolek and composer Carter Burwell’s great score which accompany the film’s gorgeous photography. It’s got Jonze’s trademark weirdness and those adults who enjoyed “Being John Malkovich” and “Adaptation.” are sure to get something out of Spike’s third go round. GRADE: B+