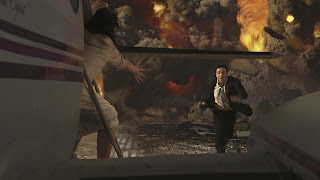 You have to remember that “2012” is a supercharged total destruction disaster movie. The dialogue is not going to be very good. The acting will be adequate. The plot will have holes. The characters won’t be too memorable. And you probably will have to slap your head a few times. There’s nothing in “2012” that says, wow this is one of the best movies ever made, so having said that I was surprised at how actually fun, intense and spectacular everything in “2012” really was. Of course it borrows heavily from almost every other disaster and action movie you’ve seen before. Think “Armageddon” meets “The Poseidon Adventure” times “Earthquake” and “Independence Day” plus “The Day After Tomorrow” add a dash of “Titanic” and “Twister” etc and you can pretty much guess what’s in store for you. However, I want to say that in terms of the spectacle you witness on screen, “2012” certainly blows them all out of the water. Of course there’s not a tornado or alien in sight, but I’ll let it slide just this once.

By now you’ve probably seen the trailer that shows John Cusack driving a limo with his family in the back while a wave of annihilation occurs just behind them. That two minute clip (it is much longer in the movie, but you get the idea) pretty much sums up what you’re in for in “2012.” It’s the money shot scene in a film full of money shot scenes. They should have just called the flick “Money Shot: The Movie!” I’m sure you’ve also heard by now that supposedly in 2012 the world is going to end. The Mayans predicted a long time ago before any of us were around and there are still some people who believe it. Roland Emmerich perhaps? So the film asks the question, what if it were true? What if the world were coming to an end? We’ve been asked this question a lot, mostly in the movies I named above. Of course this movie doesn’t cheat the way movie like Armageddon did. Come on, how many of us just wanted to see that asteroid the size of Texas hit earth and end all humanity, which would have included all Michael Bay movies? “2012” does wimp out and goes for total obliteration.

I guess I feel obligated to talk about more than just the destruction (plot? What plot?) you’ll see if you plan on going to see this 2.5 hour film, that surprisingly didn’t feel that long. Who is it that we get to watch as the earth crumbles behind them? We get John Cusack who plays Jackson Curtis a writer who works as a limo driver to a rotund Russian billionaire and is bratty twin sons. Jackon is divorced from Kate (Amanda Peet) who is remarried to Gordon (Tom McCarthy). Jackson and Kate share two children: Noah and Lilly. Meanwhile, Adrian Helmsley (Chiwetel Ejiofor) is a scientist who is predicting the world will be coming to an end. He works for President Wilson (Danny Glover) and he just might fall in love with First Daughter Laura (Thandie Newton). Carl Anheuser (Oliver Platt) fulfills the plot’s necessary “villain” role aka evil government guy and Woody Harrelson is the wacky conspiracy theorist who lives in the woods who correctly predicts when the world’s gonna end.

I don’t really feel like I have to get into much more than what I’ve already said. If you enjoy these types of movies you’ll most likely enjoy this one too. I wasn’t necessarily too surprised at what happened (surprise! the dog lives!), but it was a pretty intense ride. This is a movie that demands to be seen on the big screen. So empty your wallets already and remember even if you don’t end up liking it, it won’t be the end of the world. Bonus points for ‘America Idol’ runner up Adam Lambert’s rousing end credits anthem. GRADE: B