Disarm and a Leg: Jeremy Renner Learns to Love the Bomb in “The Hurt Locker” 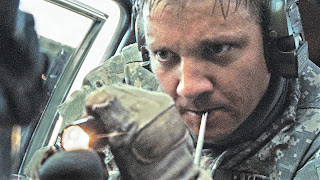 “The Hurt Locker’s” official defines its title as this: In Iraq, it is soldier vernacular to speak of explosions as sending you to “the hurt locker.” Whatever that means. I guess I didn’t get a lot of what was going on in “The Hurt Locker” the season’s critically acclaimed and potential Oscar contender. The film is gritty and does make you feel like you are a part of the bomb squad in Bagdad, but other than that I’m not so sure I enjoyed myself. Maybe you’re not supposed to enjoy yourself. I’m not sure anyone should enjoy being at war. Of course that is until we’re introduced to Sgt. William James (Jeremy Renner) who seems to be obsessed with Iraq War active duty. He’s a bomb disarming expert and gets off on dismantling bombs.

While I overall, didn’t quite love “The Hurt Locker” I’m going to emphasis its positive qualities. The movie is undoubtedly well directed. First of all, you’d never imagine a woman was behind the camera, but low and behold Kathryn Bigelow can make “guy movies” just as well as guys. With all those explosions you’d think Michael Bay was around somewhere, but luckily he is not. I don’t want to seem too impressed just because a female could direct such a gritty, shaky war action film but rather that woman would direct such a film. While there are female directors out there, they seem too preoccupied with chick flicks or romances and other sappy stuff, here there’s none of that. In fact besides Kate from “Lost” there’s nary a female character in sight. Hopefully Bigelow will join her male comrades in the Best Director category next year.

The acting in “The Hurt Locker” also ranks high up there. It’s possible Jeremy Renner could see his name on Oscar ballots come March. His character is pretty interesting in that he really only knows how to operate in stressful situations. Once his tour of duty is over he ends up going back to Iraq because diffusing bombs is all he really knows how to do. His relationship with a young Iraqi boy is pretty touching and it adds some emotional weight to a film that is mostly shootings and explosions. Although I'm not quite sure I get a later plot development that involves whether the boy has been killed or not.

And that’s where the film just leaves me feeling a little hollow. The film does a great job of making you feel like you’re there (mostly thanks to DP Barry Ackroyd who also made you feel like you were aboard a highjacked airplane in “United 93”). But plot wise, I’m not so sure I cared very much about what was going on. Don get me wrong, some of the bomb disarming sequences were pretty tense, but other than those scenes I can’t really say I was all that involved. And scripter Mark Boal literally introduces us to characters and then kills them off before you get a chance to remember their name. If you blink you might miss Ralph Fiennes or Guy Pearce. Oops spoiler alert!

I’m not saying “The Hurt Locker” is a bad movie by any stretch of the imagination, it just wasn’t my thing. In fact, watching it I sort of had the same reaction to last year’s “Slumdog Millionaire.” Afterwards, I was simply unmoved. Of course I’ve grown to like that film a lot more and I’m sure in time I will appreciate “The Hurt Locker.” Just not today. GRADE: C+

chanel handbags for cheap
Your method of explaining everything in this article is in fact good, all be able to without difficulty know it, Thanks a lot.