The Curious Case of Button, Button: Director Richard Kelly Continues to Think Outside “The Box” 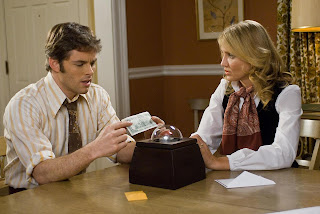 If you go and see "The Box" make sure you’re prepared to see the weirdest movie you’re likely to see. (Of course, if you go see "Antichrist" then it’ll probably be the second weirdest movie you’re likely to see). Director Richard Kelly who continues to make offbeat (read: strange) sci-fi-type movies. I wasn’t so much a fan of his cult classic "Donnie Darko" but a lot of people are. I didn’t’ have the pleasure (fortunately? Unfortunately?) of seeing his "Southland Tales" so I can’t very well comment on that flick. And that brings us to "The Box" a strange mix of mystery thriller and science fiction. Some of it works some of it doesn’t. And believe me, if you don’t really know what you’re getting into, you might as well walk out of the theater before you walk in. Wait, huh?

"The Box" is really loosely based on the short story "Button, Button" by Richard Matheson. That story, while very short, presents the reader with a fascinating moral dilemma. A strange man offers a married couple an interesting opportunity. He gives them a button. If they push the button two things will happen. They will receive $50,000 and someone they don’t know will die. The wife and husband are in financial woes. The husband doesn’t want to do it and the wife does. Eventually the woman pushes the button only to find out that her husband was just killed in a car accident. After she gets $50,000 from her husband’s life insurance policy the man who delivered the button insists that the woman never truly knew her husband.
Richard Matheson does deliver a more interesting moral story in just a few pages, but Kelly does manage to create a film that is simply fascinating from start to finish. The film begins normally as we’re introduced to Norma and Arthur Lewis (Cameron Diaz and James Marsden). The film takes place in 1976 and Kelly gets the time period perfectly (love that retro wallpaper). They’re awoken early in the morning by a knock at the door. A box is at their doorstep. Inside is a button. Later in the day a strange man named Mr. Steward with a nasty facial disfigurement comes to the door and explains the button to Norma. Like the original source if Norma pushes the button she’ll receive a million dollars and someone who she doesn’t know will die. Since the film differs greatly from the story, I will tell you that Arthur does not die (of course that assumes that she pushes the button).
Most people will find the first half the film to be enjoyable. Kelly gives the film a terrific look. There’s a glow to most scenes which I found beautiful. The performances are realistic and the button situation is utterly fascinating. I found a particular characterization pretty interesting. Norma is missing several toes on one of her feet from a freak accident when she was younger. Arthur works for NASA and is working on a special prosthesis to prevent her from limping. But in true Richard Kelly fashion he introduces us to utter weirdness before he even attempts to let us know what’s going on. The physical disfigurements reminded me of David Cronenberg. And the strange things that happen to the main characters is right out of a David Lynch movie. If you admire either of those two filmmakers you’re bound to find something to enjoy in the box.
Overall I enjoyed watching "The Box." Of course what starts out as an interesting yet simple story turns sort of convoluted and preposterous (I’m sure Kelly himself doesn’t quite understand what’s going on). However, I never found the movie to be boring. I enjoyed the weirdness. I enjoyed the performances. And I really enjoyed the Bernard Herrmann inspired score by members of the band Arcade Fire and musician Owen Pallett. If you’re not used to seeing "weird" movies that present you with strange characters and an even stranger mystery, then you should step outside of the box and see this bizarre flick. GRADE: B

Continue to Perbiki his blog to get a good blog !!