The Twilight Zone: Things Get Hairy (and Lamer) in “New Moon” 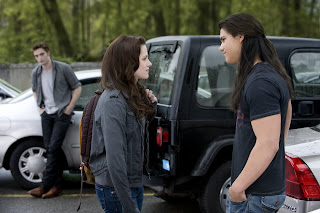 I was genuinely surprised by last year’s unexpected vampire hit “Twilight.” It was corny and cheesy but just entertaining enough to pass as an amusing time waster. Obviously since the fans are more rabid than a skunk in the daytime the next chapter was inevitable and it comes in the form of “The Twilight Saga: New Moon” which focuses on Bella’s (Kristen Stewart) frustrations after her vampire lover Edward (Robert Pattinson) leaves town and her budding friendship with a childhood friend/slab of tween beefcake known as Jacob Black (Taylor Lautner). It turns out (spoiler) Jacob is a werewolf and his arch nemesis is obviously the vampire. Luckily they have a peace treaty. So this brings up an interesting love triangle. Or at least, it should be interesting. It isn’t.

I realize I’m not quite Twilight’s target audience, but as someone who found the first movie entertaining, I was pretty disappointed by this installment. There were ups and downs, but not enough good moments to smooth over the many speed bumps along the way. Of course I’m an optimistic person, so let’s start with the positives. Lautner, who has been drawing so much attention because of his literal transformation into a real life iron man, is actually pretty charming in the role of Jacob. He didn’t get much to do in the first film except be introduced and he gets to do much more here. Of course there is such thing as too much of a good thing. By focusing too much on Jacob we loose screen time with other characters. I was fascinated by the Cullen “family,” a clan of vampires who have formed a tight nit group who don’t drink the blood of humans. They’re hardly anywhere to be found because they leave the rainy town of Forks, Washington to start a new life somewhere else. I realize this movie’s focus is supposed to be Bella’s friendship with Jacob, but as nice a kid as Jacob is, his storyline with Bella is boring and dull. Unless you’re a squealing 12 year old girl, you’ll probably be checking your watch several times.

Actually now that I think of it, the film definitely has much more downsides. I never really understood Jacob’s relationship with his “tribe members” who also turn into lame CGI werewolves. If this chapter is supposed to be all about them it fails to really take you into this world of werewolves the way the first film took you into the world of vampires. You don’t learn much about them. I’m sure the book is more descriptive, but there are actually some people out there like me who haven’t read these books. I mostly blame screenwriter Melissa Rosenberg who focuses way too much on Bella’s angst and not on other characters. We get it, Edward is the man of her dreams, she feels like she can die without him, I got that right away, move on already. Also, "Twilight" ended strangely with the red headed vampire Victoria (Rachelle Lefevre) poised to get vengeance and this film doesn’t quite know how to fit her in. Lame attempt.

It turns out that when Bella is in dangerous situations she can see Edward. So she spends most of the film driving motorcycles and jumping off cliffs. Jacob keeps saving her and she hardly even thanks him, because he’s no Edward of course. It turns out a slight miscommunication leads to Edward thinking Bella is dead and so he goes to the Volturi which is a group of vampire leaders in Italy. Here we get Michael Sheen and even Dakota Fanning hamming it up as pale bloodsuckers. Edward wants to reveal himself as a vampire and therefore wants to sacrifice himself to the Volturi. Or something like that. There is some interesting stuff here but by this point I’ve pretty much stopped caring.

I’m not so sure having a new director helped or hurt the film, but Chris Weitz is competent enough and adds some interesting flourishes. He makes time fly by in a pretty cool shot in which Bella stares out the window while the camera tracks around her in what seems to be an unbroken take. I thought maybe a male director would make the film not as “mushy” and “corny” but Mr. Weitz is just as cheesy as Twilight’s Catherine Hardwicke. Something so fascinating to me is the objectification of the male body which seems odd coming from a male director who’s married to a woman and even has a child. Obviously he didn’t have complete creative control.

I think one of the biggest problems with New Moon (and Twilight actually) is how the film seems to be filled with sexuality and yet there’s never any sex; there’s hardly any kissing. The whole movie is an annoying tease really. I realize its Mormon origins and the fact that chastity is such a dominate theme (heck Bella even uses Virgin Airlines to travel to Italy) and I realize that the target audience is young impressionable girls. But how can you flaunt these good looking guys and gals on screen and do absolutely nothing with them? It just seems like a waste (Speaking of a waste, Anna Kendrick, who is so good in the upcoming ‘Up in the Air’ is so much better here as Bella’s girlfriend than anyone else in the film, I think she should get her own spin-off). In conclusion, fans will definitely be satisfied and all others will most likely be bored. GRADE: The movie itself: C-, the movie with screaming little girls C+ Overall Grade: C

PS – Having seen the film on opening night, the experience of ‘New Moon’ was hands down more entertaining than actually watching the film, therefore I have altered my grade accordingly.