Forest Hump: Beautiful and Disturbing, “Antichrist” is Not For All Tastes 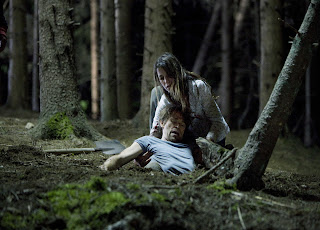 The opening sequence of Lars von Trier’s “Antichrist” is shot in beautiful, stark black and white. It’s shot in slow motion. There is no dialogue and we only hear a piece from Handel’s ‘Rinaldo.’ A man and woman are having graphic intercourse. If you’re not sure they’re actually doing it maybe the close up of penetration will ease your mind. Meanwhile the couple’s young son crawls out of his crib and falls from an opened window to his death, just as mommy is having the orgasm to end all orgasms. Distraught over their guilt, the couple retreat to a lonely cabin in the woods where they proceed to mount each other to help heal their grief. The woman is outright loony and man, a psychologist of sorts, is trying to help her. In the meantime they have strange occurrences with falling acorns, talking animals, and graphic genital mutilation. I’ll pretty much see any type of movie which includes weird art house flicks that feature graphic sexual violence. Hopefully that doesn’t say anything too negative about me. I’ll just call it open-minded.

I haven’t seen any of Dutch director Las von Trier’s other movies, but I do know that he was one of the pioneers in the Dogme 95 film movement in the early 1990s. so you know right away that when you see one of his films you’re not exactly going to get a broad Hollywood treatment. “Antichrist” is being described mostly as an art house “torture porn” horror movie that is sort of true since it contains overtly graphic shots that seem to be there just to cause shock. I want to call this a horror film mostly because I believe von Trier is trying to frighten the viewer with stark and potent images, which he does pretty well. Supposedly a few people fainted during screenings at the Cannes Film Festival. I didn’t faint during the movie, but I will say that if you’re not expecting graphic images, you’re in for either a treat or complete and utter repugnance.

It seems the general consensus is that the film is all about “man” and “woman.” The film only has two actors Willem Dafoe credited as He and Charlotte Gainsbourg credited as She. After the beautifully and purposely shot opening sequence which is known as the “prologue,” the couple retreat to Eden a summer cabin in the middle of the woods. She is rattled with guilt, understandably since she saw her son walking around while she was in ecstasy. He wants to “cure” her guilt and depression instead of working through it like normal people do. Meanwhile strange things start happening and by the end of the movie She will drill a hole through His leg and a lock on a dead weight and she will do something very painful to herself. Oh and did I mention the talking animals.

This is movie is weird with a capital W, but it’s also strangely fascinating. It’s a movie you can’t simply take your eyes off of even when the graphic violence (this flick is unrated if you were curious) is almost painful to watch. Ok it really isn’t mostly because I’m completely desensitized to cinema violence. I still don’t get how someone could faint watching this, but I digress. I don’t really “get” what von Trier is trying to say, but there are many many interpretations floating around the web. Most complain that the film is misogynistic which is a completely valid argument. While Gainsbourg’s character is just a tad irrational, (and the ridiculousness that her husband is trying to “cure” her grief) her performance is extremely heart wrenching, not to mention physically and emotionally demanding.

I have to give credit to von Trier for making a complete bizarre film that is simply too interesting to ignore. I may not really get it, but I enjoyed it. I don’t think it’s really a movie you should enjoy, but I also liked “Funny Games” so there. It’s certainly not everyone’s cup of tea (apparently so because there were only the two of us in the entire theater). If “Antichrist” is playing on one of the nineteen screens near you, and you have the courage to check it out, please do. But if you faint, don’t say I didn’t warn you. GRADE: B

I will not have anyone in my life who is not
supportive. Though many credit counseling organizations are nonprofit, their services may not be free,
cheap, or even legitimate, so do your research. Its not even a bad idea to
pre-choose your hotel and make reservations before you leave.