Roman Numeral: New Musical “Nine” is By the Numbers 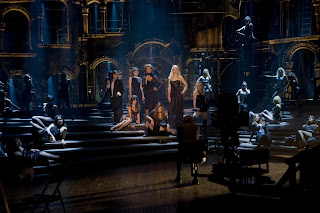 I don’t know anything about the Fellini film “8 1/2” except that it’s Italian, a “classic” and about filmmaking. I knew even less about the new musical version “Nine” which is based on the Broadway stage show which is in turn based on Fellini’s movie. Having said all that I was really looking forward to Rob Marshall’s musical extravaganza. That cast! Those sets! All that buzz! But when it all is said and done, “Nine” isn’t really that good. The songs are decent and the actors do well in their roles, but other than that I can only recommend the film to die hard “Nine” fans, (are there really that many of them? Why was this show even adapted to film?) and it's possible that even they will be disappointed.

The film stars old reliable Daniel Day-Lewis as Guido Contini (don’t worry he’s not from the Jersey Shore) a film director who is about to start work on a new film. Of course things aren’t so easy. He struggles to find inspiration but he just may find it from the many women in his life. There are only seven of them, not nine. We get Marion Cotillard as Guido’s wife. He’s cheating on her with Penelope Cruz. Nicole Kidman is the famous actress who’ll be starring in his film. Judi Dench is the costume designer. Kate Hudson is a Vogue writer. Fergie plays a prostitute. And screen siren Sophia Loren is his mother. The film takes place in 1960s Rome and it features some beautiful location photography.

The songs in “Nine” are pretty decent, but it seems to take a while to get to them. I assumed the film would begin with a fun, flashy music number but alas it does not. And it’s nearly 10 minutes in, before we get a so so song. All of the actors sing well, but Fergie’s “Be Italian” sequence is probably the stand out. Kate Hudson is pretty decent with her song “Cinema Italiano” which was written specifically for the movie. There’s nothing particularly “wrong” with the music but they lack the sense of fun of the songs in “Chicago.” That was a movie I knew nothing about going in as well and yet I was singing the songs after the movie ended.

And now, if you’ll let me, I’m going to bring out the “serious critic” in me. I think the fundamental problem with “Nine” lies within the nature of the musical numbers themselves and I have to sort of blame director Rob Marshall. He uses his “fantasy technique” which he employed so brilliantly in “Chicago.” In “Chicago” (and by the way it’s still one of if not the best movie musicals of the decade) Roxie Hart dreams of being a star. And therefore it makes sense that the musical numbers are all in her head. It’s a great way to ease the audience into the musical sequences since it really isn’t just characters breaking out into song. Marshall uses the same technique in “Nine” and yet it just doesn’t work. It just feels sloppy, repetitive and unoriginal. And it’s wholly unneeded. It feels like a flashy way to have cool editing and doesn’t serve the story.

I really can’t recommend “Nine” even though it’ll surely pick up an undeserving Best Picture nomination next month. I still don’t think this ten Best Picture thing is really the best idea. I just feel like this is a missed opportunity. It could have been a fantastic film that skewered the film industry and yet it really doesn’t have much to say. If you’re a fan of either stage version you’ll probably enjoy it. Or if you’re a fan of beautiful Italian locales be my guest. But out of all the movies with the number 9 in its title this year (“9,” “District 9”) this is definitely the one to avoid. GRADE: C-

Appreciate the recommendation. Will try it out.