"The Road" Less Traveled: The Long Delayed Flick Should Have Stayed Delayed 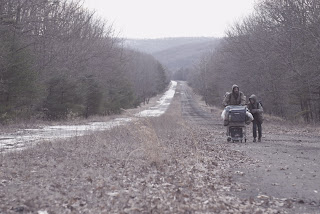 “The Road” is the antithesis of recent end of the world dramas like “2012.” Now this is a good thing and a bad thing. It’s a good thing because “The Road” is not about how the world ends or why, but what comes after and the desolate and depressing future that lies ahead. But at the same time, is anyone really surprised by what the world will be like after some unknown cataclysmic event happens? There is not society, no morals, no order. It’s dark, bleak and chaotic. And much like the movie “The Road” I’m sure it would be pretty boring at times.

This is my main conflict with “The Road” it paints an interesting idea of a unnamed man and son trying to live life in a wasteland of a world (which almost reminded me of “The Land Before Time” at parts) filled with people without morals or any sense of decency (aka cannibals), but watching two people just walk along a bleak landscape isn’t quite the rousing motion picture I was expecting. It’s sad because there are some terrific set ups for what could have been amazingly suspenseful sequences, and yet they fizzle rather quickly and before you know it there’s more walking.

The always reliable Viggo Mortensen gives a great performance as “man” who is trying to provide a livable life for his young son (played by Kodi Smit-McPhee). We get to see flashbacks (this structure sort of reminded me of “Lost” actually) of his life with his wife played by Charlize Theron. Theron’s character is seen all too briefly but I hear this is actually an expanded up role as compared to Cormac McCarthy’s novel. Man and son spend most of their time trying to get to the coast in hopes that there might be some sort of salvation. But they mostly try to find food and make haphazard forms of temporary shelter from the dying world.

I think however the most interesting characters in the film are actually the cannibals. I actually wish writer Joe Penhall gave them more screen time. Man and boy even come across a bunch of locked up, starved people in the basement of a rundown house. They have inadvertently entered the home of some cannibals. This should have been an exciting sequence, but alas man and boy get away with nary a scratch. I know this is sad, but true: I felt cheated that we didn’t actually get to see any actual cannibalism on screen. I mean I realize this isn’t a slasher movie, but I mean come on! These despicable human beings who live on other humans actually make more fascinating characters than the moralistic man and boy. The story definitely should have been from the cannibals perspective.

And another thing. I’m not sure I liked director John Hillcoat’s vision of this gloomy future. Just because this film takes place in a grungy, dirty, grey, ash-covers-the-sky world, doesn’t mean the cinematography has to be so “ugly.” A similar type movie like “Children of Men” takes place in a similar dystopian type future and yet its camera work is completely stellar. There was nothing particularly amazing about the camera in “The Road.” I felt a little disappointed by the visual aspect of the film.

I can really only recommend “The Road” for Viggo’s assured performance, but he’s really great in anything so that’s really only a mild praise. It seems like “The Road” wasn’t really sure what it wanted to be. It felt like it could have top notch intense sequences between the moral people and the immoral people, but everything sort of fell flat. There are some strong themes here (isolation, morality, etc) but we’ve seen them before. I can’t shake the feeling that the movie seems like an art house version of “I Am Legend” with cannibals taking the place of the “infected.” Some consider McCarthy’s “The Road” to be one of the best novels written this decade, and while I haven’t read it, maybe it just works better as words. Nothing on screen is as powerful as I’d have liked it to be. "The Road" isn't really a bad movie, it's just disappointing. GRADE: C

Fake watches had since 2011 to regain pride in the development of replica watches movement, launched four years eight both practical and aesthetically pleasing personality independent movement. Delicate operation to show the movement and metal mechanical aesthetics rolex replica sale independent movement gives full hollow rolex replica sale confident temperament and Zoran gentleman demeanor, elegant ladies wrist and a different kind of charm. Has more than three days power reserve of H-10 independent movement, so that the appearance of the classic rolex replica sale of freedom of spirit is more durable and reliable automatic mechanical watch, so watch at idle weekend is still running. Tour also starting a new khaki field double 2014 calendar series, which is mounted on the same series of replica watches also has more than three days power reserve, is a "calendar", "weeks" double calendar display the sweep of the watch. Hublot replica uk is rolex replica sale form, during the more than 100 million have been manufactured over the armed forces timer, superior quality and reliable, is one of the most famous military form.