The Canine Mutiny: Steven Spielberg Takes a Crack at Motion Capture in “The Adventures of Tintin” 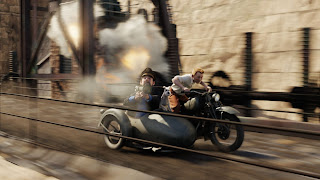 Where’s Janusz Kaminski when you need him? The wonderful cinematographer has given each one of Steven Spielberg’s it’s trademark look since 1993’s “Schindler’s List” and for the firs time since then he hasn’t been needed because “The Adventures of Tintin” is the director’s first (and hopefully last) foray into the world of 3D motion capture filmmaking. I don’t know if I just don’t “get” motion capture, but it tends to not work (in Robert Zemeckis’ recent films) more than is works (James Cameron’s epic “Avatar”). There’s something about having “animation” so realistic that just doesn’t quite make perfect sense. I’d rather just see live images than computer images that looks really lifelike. This style of filmmaking caused hollow gap between me and film which made me feel distant. There’s something about watching CGI characters get into life threatening situations that just isn’t all that exciting or suspenseful, not matter how well Spielberg stages them.

If you’re like most Americans, than you probably don’t know much about Tintin. That’s because it’s way popular in England and not very popular here. It’s a comic book series by Belgian artist Hergé about a young reporter named Tintin (I thought he was just a young teen but perhaps he’s in his twenties) and his trustworthy dog Snowy. They go on fun adventures together and solve mysteries. In the film, Tintin (Jamie Bell) purchases a model of a three mast shipped called the Unicorn. Of course, he’s not the only one who wants it – the bad guys want it to. It turns out that this model ship (and two others) are hiding clues to a hidden treasure. In turn, Tintin is shot at and eventually kidnapped, and put on a cargo ship where he meets up with the drunken Haddock (Andy Serkis). They’re able to escape, but in hot pursuit while they get caught up in wild action scene after the next. The script (by Steven Moffat and Edgar Wright & Joe Cornish) is really just a series of fast-paced action scenes with hardly time to get a chance to care about anyone but the dog.

I’m actually surprised that I found all of this adventure stuff to be rather uninteresting, as Spielberg has yet to make a “dull” adventure film. I think most of that has to due with the motion capture aspect of the film because I just didn’t find the characters or locales to be particularly engaging. I never once felt for the character’s lives - Tintin never seemed in danger to me, and he was way too brave. In fact, Snowy, the cute Wire Fox Terrier, definitely had the most personality. I would watch an entire spin-off film about him. The film just relied too much on action set-pieces that weren’t all that exciting – or impressive – because they were animated. If this had been an actual live action film, it would have been astonishing. And I realize that’s the point – because you can accomplish certain shots with animation that you can’t accomplish in live action. But if anyone could, couldn’t Spielberg?

“The Adventures of Tintin” is not a bad movie by any means – it’s beautiful to look at – although I’m not even sure why it needed to be seen in 3D – but something about it left me cold. I felt disconnected from the adventures occurring onscreen. Too much time was spent on a plot I didn’t find particularly interesting or characters I didn’t find particularly appealing. The film is a technical achievement (Weta Digital does it again) and it features another enjoyable John Williams score. But had I not known who directed this film going in, I might not have even realized Steven Spielberg was involved. I missed the trademark look of a Spielberg film, which is why at least I’ve got “War Horse” to look forward to. GRADE: B-

It's remarkable to pay a quick visit this web site and reading the views of all friends on the topic of this post, while
I am also keen of getting know-how.

Here is my weblog erc vietnam