Home Swede Home: The Excellent “The Girl with the Dragon Tattoo” Truly is the Feel Bad Movie of the Christmas Season 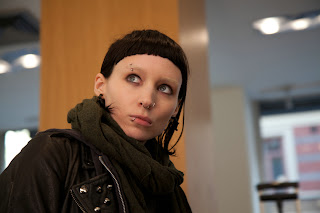 Here’s the David Fincher I’ve been missing! The director known for such dark and gritty fare like “Fight Club” and “Seven” has finally returned to gloomy form after a few attempts at breaking out into the mainstream with Oscar favorites like the strange period drama “The Curious Case of Benjamin Button” and the mildly overrated “The Social Network.” Here he tells his version of the popular Swedish crime novel “The Girl with the Dragon Tattoo” (originally titled “Men Who Hate Women”)about a journalist who teams up with a young goth computer hacker to help solve a murder mystery. The world has already given us one film adaptation merely a year and a half ago, but this material was made to be turn into a Fincher masterpiece. It’s cold, stark atmosphere and disturbing mix of violence and sex are weaved into a fascinating, if sometimes complicated, story of vengeance and murder.

Let me attempt to make sense of this complex plot and all those Swedish names. Henrik Vanger’s (Christopher Plummer) great niece Harriet disappeared from her rich family’s estate 40 years ago. There’s been no trace of her. Henrick believes she’s been murdered and he suspects one of his family members. He hires journalist Mikael Blomkvist (Daniel Craig) to research his family’s history and try to help figure out what happened to Harriet. Mikael is in some trouble of his own after he’s caught up in a libel suit at “Millennium” magazine where he works. Since Henrick is offering lots of money and some possible insider info about the rich businessman suing him, Mikael hesitantly accepts the job where he stays in a drafty cottage while he meets the extended family and tries to put pieces of the puzzle together. Meanwhile, a young socially reclusive woman named Lisbeth Salander (Rooney Mara, who took on another iconic female role in the “Nightmare on Elm Street” remake), who’s an expert computer hacker and heavily pierced, is hired to do a background check on Mikael, and once he discovers how easily she’s able to find info on him, insists that she come work with him to help solve Harriet’s possible murder.

That’s the basic gist of the plot, but there’s so much more. Lisbeth is a pretty interesting character and that’s mostly because we learn that she’s had a rather difficult upbringing and unfortunately her financial assets are locked away, where her sleazy financial guardian makes her perform grotesque sexual acts. This includes a disturbing rape sequence that Fincher doesn’t shy away from. This stuff is hard to watch and feels almost manipulative to get you to side with this character and force you to become implicated in her equally disturbing revenge, where she ties up her attacker, sodomizes him, and tattoos “I am a rapist pig” on his chest. This later helps her sympathize with Mikael’s quest to find out what happened to Harriet and lots of other tortured and murdered women. And of course things get lonely for Mikael and Lisbeth, so eventually they “get together.”

Besides telling a rather absorbing story, which has already been told twice before, so it’s all new to me, “The Girl with the Dragon Tattoo” also offers many great reasons to classify this as brilliant filmmaking. The acting is superb. Mara totally takes command of her role. She’s sort of cold and withdrawn, but feisty enough to be likable and sympathetic. I imagine most young actresses who would take on the role would do it serviceable justice, but Mara completely transformers herself not only emotionally but physically. Craig is good as well, in a less flashy role, and Plummer has a few good moments as well. Overall the ensemble is impressive. Fincher’s trademark bleak style fits perfectly with the story and his cinematographer captures his vision wonderfully. This is simply a film that feels as cold and isolated as it looks. Oscar winners Trent Reznor and Atticus Ross’ terrifically cold and mechanical score helps tremendously. And probably the coolest sequence in the entire film is the opening titles, set to Karen O’s wonderful cover of “Immigrant Song” with such strange and mind-bending images; it’s a Fincher standout and certainly a worthy rival to “Seven’s” notoriously creepy titles.

“The Girl with the Dragon Tattoo” is wonderful filmmaking all around. Does this movie need to exist? No. But what movie really needs to exists after all? This movie should exist because it deserves to be made by someone of Fincher’s unbridled talent. It offers everything a fan of his work would want and it’s arguably as good as any of his earlier work. Sure some parts sort of went over my head, but that’s what Wikipedia is for. And if it makes someone want to go back and see the original Swedish version, or even read the book then it has every reason to exist. It certainly won’t warm your heart this holiday season; that’s what war movies about horses are for.GRADE: A-