Silence is Olden: The Silent Film Homage “The Artist” is Simply Charming 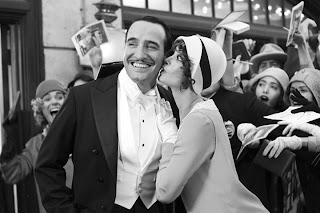 If you had told me months ago that I would go see a silent movie in the theater and also enjoy it I would have said you’re crazy. Silent films are so last century. But somehow the wonderful silent film “The Artist” manages to not only be entertaining, but a fascinating look back at an important era in cinematic history. Nostalgia has been a strong theme this year with films like “Hugo” and “Midnight in Paris,” and the “The Artist” is no exception. Watching the film was like a miracle – me, sitting there, not completely bored out of my mind - without a line of audible dialogue uttered.

Just like “Singin’ in the Rain,” “The Artist” is set back in the day when silent films began transitioning to sound. Jean Dujardin (a definite Best Actor nominee if not winner) is the movie star George Valentin. He is silent movies. However, for some reason, once “talkies” become all the rage, it’s out with the old and in with the new. A young up and coming actress named Peppy Miller (the bubbly Bérénice Bejo) becomes the hot new item in cinema. It’s the perfect story to tell for this kind of format, which to be frank, feels like it should be extremely gimmicky, but somehow manages to overcome this trickery. You quickly get over the fact that you’re watching a black & white silent film with modern day filmmaking techniques, and you lose yourself in the story and characters.

French director Michel Hazanavicius (who also wrote the film) has crafted an utterly entertaining, and purely delightful tale. His movie is downright funny – and it features one of the best performances by a dog ever captured on film. His film is completely devoid of pretentiousness. He just wants to tell the story about a silent film star using silent film as a medium to do it. Nothing more, nothing less. His actors – some of which are completely recognizable – give it their all. It was great to see people like John Goodman and James Cromwell – heck even that lady from “Speed” who always shows up in things – getting paid to be expressive and hone their non-verbal acting skills.

What is truly great here – besides all the wonderful technical aspects (like wonderful cinematography and production design, and a pretty cool dream sequence) is the dazzling performances and chemistry of the two lead performers. Dujardin first of all just looks like an actor from the 1920s, which helps; he gives such an animated and heartfelt performance, it’s amazing to realize you never actually hear him speak. The same goes for Bejo who, like her leading man, is able to emote feelings of sadness or glee as if it were as easy as tying her shoes. Ludovic Bource’s wonderful film score is also a wonderful character in the film. I would have to assume that Hazanavicius is an expert in silent cinema, or at least a huge fan, as he directs their performances with great precision and yet makes it seem like an effortless breeze.

“The Artist” was a film I was prepared to dislike since it’s made in the style of film that I’m not particularly a fan of (although Penelope Ann Miller from “Adventures in Babysitting” always helps). I’m sure there are plenty of people my age who would rather go to church than sit through a silent film, but this is the rare exception. I doubt it’ll start a new wave of silent filmmaking – and I don’t know that it’ll be that well remembered years from no – but I’ll be damned if it isn’t simply one of the most charming movies of the year. GRADE: A-


The Origina Replica Breitling claimed the bubble as a potential source of weakness that they were finally able to overcome with technology. Well, heading back to the late 1960’s and the high-end?,Rolex Submarine the brand took a page from the contemporary Detroit era of cars – as in, there’s no cure for cubic inches. In 1:1 Replica Rolex Watches case, though, they mounted what now looks like an absolutely insane crystal that’s now known to Tag Heuer Watches?collectors as a “Top Hat”.He sent lots of pictures along the way to show the innards of the?Omega Watches , including the Hermes handbags correctly signed inside case back.