Season of the Bitch: Charlize Theron Humanizes the Girl You Hated in High School in “Young Adult” 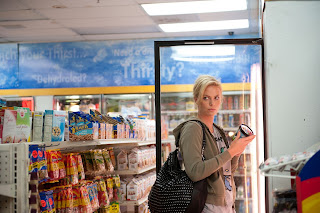 “Juno” had a warm fuzzy pop cultured heart at the center of its story of a high school outcast. “Young Adult” is its darker, more cynical cousin that tells the story of an aging former popular high school girl whose life isn’t nearly as awesome as her old classmates would assume it’d be. Charlize Theron is a wonderful actress who can transform physically for a great performance – like in "Monster" – but here she looks like herself. She’s beautiful and fit. It’s her facial expressions and mannerisms that she nails completely. She can articulate emotion (although her character hardly knows the meaning of the word) with just a simple expression or scrunch of her face. She can tell you what she’s thinking without saying a word. That’s great acting. And it helps when you have a sharp and acidic screenplay by Oscar-winner Diablo Cody and assured direction from Jason Reitman.

I can’t imagine that “Young Adult” is going to be a crowd pleasing hit the way “Juno” was. “Young Adult’s" main character is a selfish, self-destructive alcoholic nobody who only cares about her own needs. I’ll tell you right now she doesn’t change much throughout the film which might irk some people. But why should she change? This isn’t a life lesson movie or a traditional Hollywood story. This is the story of a woman who was a mean girl and still is at age 37. But Theron is so good in portraying her that I cared just enough about this despicable human being. And that’s the thing: you get to sort of care about a horrible person, which can sometimes be fun.

So who exactly is this horrible person anyways? She’s Mavis Gary. She’s from a small town in Minnesota. She was the popular Prom Queen with the perfect jock boyfriend. She left her tiny town to pursue big things in the big city – Minneapolis. Not LA, not New York. She became the author of a popular young adult series. Well actually she’s a ghost writer. And the series isn’t doing well and has been canceled and she’s working on the last book. She overhears dialogue and gets insight from the teens she observes daily. She drinks a lot, her super nice condo is basically a dump, and she lounges around in over-sized sweatpants and Hello Kitty t-shirts. This is certainly not the life she envisioned for herself. Besides, how often do we achieve the goals we set for ourselves? But if the popular girl ends up like this, what does that mean for the rest of us nerds? She hears about her ex-boyfriend’s new baby daughter, and even though he’s married with a new family, she insists on going back to the stinking town and steal him back. What a skank!

Mavis packs a suitcase and her tiny dog and hits the road. She has a new goal in life: steal back her ex. Lofty ambitions indeed. She stumbles into town where she confronts a former classmate named Matt (Patton Oswalt) who was in a completely different circle in high school and paid for it badly: he was severely beaten by bullies which left him physically scared. Matt and Mavis form one of the more unlikely pairings in recent memory. I’m surprised she even talked to him for as long as she did, but once she found out he made his own booze at home, that’s all she needed to know. Matt, being the voice of reason, insists that trying to steal back Buddy Slate (Patrick Wilson) is the worst idea in the history of bad ideas. Mavis clearly hates everything about this town whether it’s the kitschy local bars or the Kentucky Fried Chicken/Taco Bell/Pizza Hut or having to run into her own parents. And then there’s the look of pure disgust on her face when she gets a first look at Buddy’s new baby in person. While most humans smile with joy at seeing an infant, Mavis looks like she just got selected for jury duty. And Theron sells it.

Diablo Cody is a great writer and she makes a wonderful team with Reitman’s great direction. Cody tones down the pop culture savvy dialogue, but her trademark wit is there front and center. It’s cool to see the darker side of both artists and it’s obvious with the success of their other films that they pretty much have free reign to do whatever they want. “Young Adult” is truly a fascinating look at a woman who never quite grew up. She’s stuck in this eternal young adulthood, having to literally write for years about teenagers. As the film progresses you realize that she’s not just a teenager in a woman’s body, but a seriously flawed and psychologically damaged individual, and since I’m not a horrible, evil person, I can even find sympathy for people like Mavis Gary. GRADE: A-