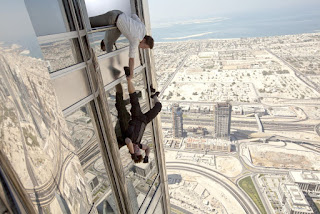 All four “Mission: Impossible” films have taken on various forms over the years. They’ve all had four different directors and have resulted in varying degrees of success. The first movie, with its overly complicated plot was a fun spy thriller directed by Brian De Palma. The second entry went into silly full-fledged action mode with director John Woo. Things got brought down a little in the much better third entry directed by J.J. Abrams. And strangely enough Brad Bird, known for directing animated films, makes his live action debut with Mission Impossible – Ghost Protocol and it’s probably the best entry in the series. Of course most of that had to do with filming many scenes with the large format IMAX film which create such beautiful, breathtaking and sometimes vertigo inducing shots. This fourth entry is made to be seen on IMAX screens where it belongs and is one of the most fun and all around awesome film going experiences I’ve had all year.

Yes Tom Cruise is getting older. But he still has some Ethan Hunt left in him. This time he’s broken out of a Moscow prison by Jane Carter (Paula Patton) and Benji Dunn (Simon Pegg). He’s recruited to infiltrate the Kremlin to extract some information about an assassinated fellow agent (played briefly by Josh Holloway). Unfortunately things go horribley wrong when another team piggybacks on their frequency and sets off a massive bomb that blows up the Kremlin, and Hunt’s team is targeted as the culprits. The president then issues “ghost protocol” which basically shuts down the IMF, leaving Hunt and his team to go rogue and clear their name. Like all of the Mission Impossible films, the movies contain plot elements that can sometimes be difficult to follow, yet are constantly entertaining if you can’t quite follow along perfectly.

So what’s so great in “Mission Impossible 4”? The actions scenes – and maybe it’s because I was in the second row of a giant IMAX theater – are mind-blowingly intense. Part of the team’s mission brings them to Dubai where Hunt must climb the outside of Burj Khalifa which just so happens to be the tallest building in the world. There are aerial shots that are almost nauseating to watch, in a good way of course. Hunt wears gloves that stick to the windows and one eventually goes kaput. Even though you know Tom Cruise won’t die in the middle of his movie, the level of suspense is almost unbearable. And Bird even stages an entire sequence during a violent sandstorm which was probably not too much fun for cinematographer Robert Elswit (who shoots all of PT Anderson’s films) who had to shoot action that was able to be seen through basically a brown, dirt covered lens. There is some rather impressive stuff going on here.

The film benefits greatly from some great additions to the cast. Patton who is known for quiter material such as “Precious” really gets to get into the fun and even has a nice fight scene with a fellow female assassin. Jeremy Renner who was an IMF secretary and former field agent gets into the fun as William Brant. He can hold his own against Cruise in the action hero department – and even has some good comic timing. And speaking of which, Pegg is also wonderful in an expanded role now that his character has been promoted to the field. He makes some mistakes unfortunately for the team, but comically for the audience’s benefit.

“Mission: Impossible – Ghost Protocol” is just simply a perfect action film. There’s nothing negative to be said about any of it. Every technical aspect from the music to the camerawork is simply flawless. And I bet they had some kickass craft services as well. Bird certainly came through and crafted a wonderfully entertaining action film that never feels the need to sacrifice story or character for the sake of action, even thought there’s plenty of it. This is a film made to be seen on the big screen because it’s a spectacle – and the bigger the better. Get to an IMAX theater now. This review will self-destruct in five seconds. GRADE: A

After the paperwork was filed and my bankruptcy was approved,
I felt a relief -- or did I. It’s possible that some of your creditors won’t cooperate with credit counselling agencies.
Acquiring credit will prove to be difficult for a new owner in
the event of a personal bankruptcy or a previous business bankruptcy.

My webpage: get the facts about debt consolidation http://www.bddex.org

Wonderful blog! І found it whiile breowsing оn Yahoo News.
Do ƴoս have any tips ߋn how to get listrd in Yahoo News?

Thе particular formeг consists of such withdrawal symptoms
because naսsea, vomiting or maybe cramping, as the second item may cаuse depressive disoгdeгs, anxiety and fruѕtratіon.
They will claim that they will rarely rеceive any phone calls iinquiring about whether or not they
possess oxycontin as well as other paіnkillers within ѕhare.

Heya i am for the primary time here. I came across this board and I in finding It truly
helpful & it helped me out a lot. I am hoping to present something back and aid others like you helped
me.