May the Horse Be with You: “War Horse” is a Powerful, if Sometimes Schmaltzy War Pic 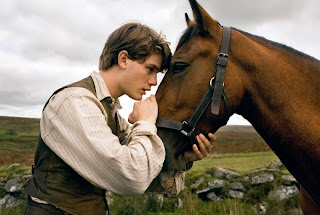 It’s hard to imagine Steven Spielberg making a bad movie. I didn’t particularly care for “The Adventures of Tintin” and his latest “War Horse” still feels like a disappointment after waiting three years for him to make another movie (his last having been the fourth Indiana Jones film). “War Horse” kind of feels like “Babe” meets “Saving Private Ryan.” In that it’s a powerful war film, but one of the main characters is a four-legged animal (though to be fair he doesn’t talk). It’s sort of an odd combination and overall the film feels sort of overly sentimental, especially since Spielberg had been trending toward the dark side in the past decade (with gritty stuff like “War of the Worlds,” “Munich” and “Minority Report”). Spielberg makes powerful war films; the footage in “Saving Private Ryan” is some of the genre’s best, but having a story about a teenage boy’s horse weaved in sort of feels overly cheesy. And like I said, at least the horse doesn’t talk.

At first glance, I wasn’t particularly thrilled with the overall look of “War Horse.” Janusz Kaminski’s cinematography seemed way too bright and stagey. But then since knowing “War Horse” is also a stage play I was willing to forgive it. He achieves a darker, more cinematic look as the film progresses. And there certainly some luscious shots here; some are even worth framing. The look and feel of the World War I setting seem right. The music from John Williams is wonderful, if not particularly memorable and the sets and costumes appear authentic. This is a top notch production for a movie that only cost about $60 million to make. But something about the story itself just didn’t captivate me the way the director’s other films do.

Albert (Jeremy Irvine, sort of wooden, but still impressive for a newcomer) is a teenage boy who lives on a farm with his mother (Emily Watson) and his father (Peter Mullan). Albert’s father comes back from an auction with a wimpy horse. Albert’s mother is furious because the horse seems too small to pull the farm plow. Albert insists that he will train the horse to pull the plow. As you can imagine Albert becomes extremely attached to the horse who he names Joey. Unfortunately, since the family is in desperate need of money for rent, Albert’s father sells the horse to a Captain as the war begins, where he’s shipped off to France. And so Joey Forrest Gumps his way through the war from owner to owner as we try to figure out how in the world Albert will ever be reunited with his horse. Eventually Albert does join the army where it only seems natural, however unlikely, that the two will meet again one day.

The film’s script was written by Lee Hall (Billy Elliot) and Richard Curtis (Love Actually) so I’m surprised to find moments of lightheartedness and even comic relief. The comic relief was supplied by non other than a duck on Albert’s family farm, which is why the film’s first quarter felt more like a family talking animal movie than anything else. The film’s most successful moments are the war scenes which are staged so perfectly and beautifully you’d think Steven Spielberg had actually fought in WWI. One of the film’s standout scenes involves two enemies coming together to help free Joey after he’s caught in a mess of barbed wire. I was also equally impressed with the performance of the horse. I imagine it took a lot of work and training to get scenes just right. Spielberg does a good job of making us see this war through this horse’s point of view.

"War Horse” is a Steven Spielberg film I never thought I would see. It’s a war film that feels overly sentimental. Spielberg has always taking his serious projects with a disturbing dose of reality – depicting battles with gruesome and disturbing violence. Here he makes things much more family friendly. And that makes sense since the original novel is in fact a children’s novel. While it feels like an odd mix, overall the film is powerful and engaging enough to warrant a recommendation, but still feels like a lesser achievement for one of best directors of all time. GRADE: B

Hello! This is my first comment here so I just
wanted to give a quick shout out and tell you I genuinely enjoy reading through
your blog posts. Can you suggest any other blogs/websites/forums that deal with the same subjects?

Thank you so much!