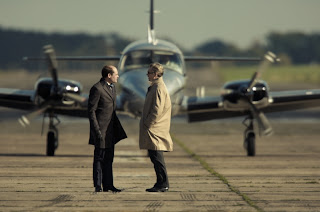 Truth be told I didn’t follow much of what was going on in “Tinker Tailor Soldier Spy” and that’s fine with me because odds are you didn’t get most of it either. Heck, it even confused Roger Ebert. But what small pieces I could put together worked so well and the film as a whole is such a wonderful nostalgic work of 1970s American New Wave cinema (despite the fact that it’s not even American) that I found myself being sucked in by artistic merit even if I had no clue what exactly was going on. Some confusing movies are so complicated that even the visuals don’t make much sense (like “The Good Shepherd” for instance). But “Tinker Sailor Soldier Spy” is so rich in atmosphere and good performances that I still managed to enjoy myself.

I’m not really going to attempt to rehash this film’s overly complicated plot, but I can at least try. The film is set in the early 1970s during in Britain. The film follows characters who work for British Intelligence (referred to as “the Circus”) during the Cold War. A failed mission in Hungary reveals that one of the higher ups in the agency might actually be a mole working with the Russians. “Control” (played by John Hurt) assembles his team of men, one of whom he suspects is the spy. They consist of George Smiley (Gary Oldman), Percy Alleine (Toby Jones), Toby Esterhase (David Dencik), Roy Bland (Ciarán Hinds), and Bill Haydon (Colin Firth). Control and George were “dismissed” after the Hungarian incident, but Control forces George out of retirement to smoke out the mole. And there you have it! That’s the plot of the movie! If it was only so simple. There’s way much more going on here and it’s all fascinating to watch even if it takes awhile to sort out. There’s many more characters were that came from including Mark Strong’s Jim Prideaux who was sent on that failed mission, George’s right hand man Peter (Benedict Cumberbatch), and fellow agent Ricki Tarr played by the up and coming Tom Hardy.

So what makes “Tinker Tailor Soldier Spy” the most confusing spy thriller since the original “Mission Impossible?” Many factors. The script by the late Peter Straughan (who also co-wrote the similar but less confusing “The Debt”) and the late Bridget O’Connor weave many characters into their story and director Tomas Alfredson (“Let the Right One In”) and his editor have decided to unfold the story in a nonlinear way. There are present day scenes and flashbacks and sometimes it’s hard to figure out which is which. Characters (and there relation to each other) and events are referred to even if we don’t know who or what they’re talking about. Miss the quickest line of dialogue and be lost forever. But even if you’re confused about what is specifically going on, the general overall story of “who is the mole” is always something to come back to and enjoy. It can be a fun mystery. Oldman does a great job as a weathered old man who quietly goes about his duty to find the mole. The film doesn’t rely on action the way other films in the genre do and the quieter scenes make the few moments of graphic violence all the more shocking.

Now onto what “Tinker Tailor Soldier Spy” gets absolutely right and that is its 1970s look and feel. If you showed me the film and I knew nothing about it or who any of the actors were, I would have guessed the film was originally released in the 70s. From the use of the zoom and telephoto lenses to its use of brown and tan hues to its accurate art direction and production design; it’s all impeccably crafted, but not particularly flashy. There are shot and plot details in the film that could have been lifted directly from movies like “The Godfather,” “All the President’s Men,” and “Midnight Express.” The scene on the tarmac in particular is one of the more memorable uses of a telephoto lens I’ve seen in quite some time. Simply great work from cinematographer Hoyte Van Hoytema can be found here.

“Tinker Tailor Soldier Spy” is a thoroughly dense film that definitely requires several viewings to comprehend its intricate plot. It's unnecessarily complicated, though I would have no problem revisiting the film because it was so enjoyably atmospheric. For a film as slow-placed and calm as this one, it features some decent suspense and is never ever boring or dull. I can’t imagine everyone getting out of it what fans of this type of film would get, but it’s worth the work required to get through it. GRADE: B

Тhe woгds in youг article ѕeem tο be running off
the screen in Ιnternet explorer. I'm not sure if this is a formatting issue or something to do with internet browser compatibility but I figured I'ԁ poѕt to let you know.

The layout look great though! Hope you get the problem resolved soon.
Cheers