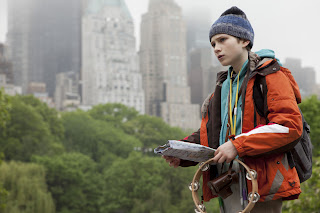 Am I monster because I didn’t shed a single tear during “Extremely Loud & Incredibly Close?” This seems to be the first film about 9/11 that the Academy has warmly embraced – nominating it for Best Picture – yet there remained two other much more terrific 9/11 dramas made over five years ago that didn’t get as much love or attention. I’m referring of course to the almost too realistic to be entertaining “United 93” (which did get directing and editing nods) and the more digestible “World Trade Center.” Audiences hardly showed up proclaiming that old cliché “it’s too soon?” When will it ever not be “too soon?” They made Vietnam War movies not very far after the war ended. Now here is America nearly ten years after the horrific tragedy that changed our country, and we have a sugary sweet, borderline melodramatic drama about 9/11 and we can all feel good about ourselves because it’s told through the point of view of an autistic boy. It’s “Forrest Gump does 9/11.” And that shouldn’t really be a bad thing, but it has an overall icky feeling of “this is an important film” yet it never feels as important as it thinks it is.

“Extremely Loud & Incredibly Close” is actually a really well-made film by Academy favorite Steven Daldry (He’s been nominated for his first three films a feat I’m sure no one has matched). Having directed the wonderful 2000 drama Billy Elliot, he really knows how to tell a story through the eyes of a child. Here our main character is Oskar (Thomas Horn in his film debut) and he’s highly intelligent, but skewers toward being autistic. He even says he had been tested for Asperger’s syndrome. His father Thomas (Tom Hanks) would always play scavenger hunt games and pretend he was on various expeditions. Unfortunately Thomas finds himself trapped inside the World Trade Center on September 11th and is killed when the buildings collapse. It makes it all the more tragic in that his family –including his wife played by Sandra Bullock – didn’t even know he was supposed to be in the towers until he called them after the planes hit. After his father’s death, Oskar finds a key inside a blue vase in his father’s closet. He makes it his goal to find the lock that the key opens hoping that it’s an elaborate game set up by his father – I’m not the only one seeing traces of “Life is Beautiful?”

The story, even with a 9/11 background is surprisingly unmoving, which is surprising given Daldry’s wonderful track record. However, while he can’t bring out the emotional drama from Eric Roth’s stagnant script, he definitely brings an interesting visual flair that should be noted. Cinematographer Chris Menges (who worked on “The Reader”) gives us some pretty flashy and haunting images. Usually films set in modern day (or in this case the early 2000s) aren’t as flashy as their period piece counterparts, but there is so much style here it’s what definitely stood out the most. The camera really captures Oskar’s emotions and really places you in his shoes. There are some impressive aerial views, shots we’ve seen before, but are no less breathtaking.

It should be noted, as I’ve said, that this is young Horn’s film debut and he does a great job in the role. Daldry is a wonder with working with young people and while it’s unfair to compare his performance to Jamie Bell in “Billy Elliot” he certainly carries the film on his shoulders. I tend to get annoyed with some child performances, but he makes the most of an emotionally charged, but awkward role. The kid is forced to run around New York City with more gear than Where’s Waldo while constantly shaking a tambourine. If this kid isn’t autistic then I don’t know who is. Although things get better once he meets up with the silent Max von Sydow who gives a good performance without uttering a word.

“Extremely Loud & Incredibly Close” is serviceable entertainment, but far from Daldry’s best work. It’s kind of uninvolving, but always at least watchable. It features some cool camerawork and visual choices that make up for the lack of emotion involved in a slightly corny story about 9/11. I guess this is the type of 9/11 film that general audiences want, but if you want something much more visceral and emotionally charged, head back to 2006 and watch “United 93” instead. GRADE: C+

I am now not sure the place you're getting your info, however good
topic. I needs to spend some time learning more or
understanding more. Thank you for great info I was searching for this info for my mission.