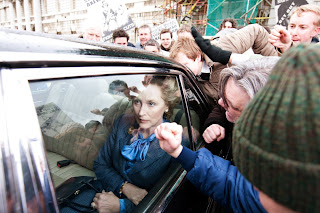 The musings you’ve heard are true: “The Iron Lady” is worth seeing for Meryl Streep’s brilliant and uncanny performances as Prime Minister Margaret Thatcher. To say she gives an Oscar-worthy performance is an understatement. The film isn’t as horrible as some would have you to believe, but you probably won’t leave the film knowing that much more about Margaret Thatcher than you knew going in. It really just skims the surface of her life, spending a majority of the screen time exploring Thatcher’s sad slip into dementia. And that’s where the film just feels like a big budgeted Lifetime movie searching for a reason to playing on the big screen.

Director Phyllida Lloyd, I’ll admit, seems a strange choice to bring the story of Margaret Thatcher to the screen. Known primarily for her theatre work, the woman has only directed the Meryl Streep film musical “Mamma Mia!” which is presently the highest grossing film ever in England. And when that happens, you can direct any freaking movie you want. She makes some odd directorial choices, which to be fair, were most likely found in Abi Morgan’s screenplay (who’s much better work can be found in the brilliant film “Shame”). I was surprised to find out a majority of the film is actually set in the present, as an Margaret Thatcher (Streep) deals with her wandering mind. She has visions of her late husband, who she doesn’t always realizes isn’t really there. Her husband Denis is portrayed by Jim Broadbent, who provides some awkward comic relief. He almost seems to belong in a different movie – although his overacting fits with the increasingly deteriorating mind of the film’s main subject.

Then there are scenes of middle aged Thatcher as she begins her political career by finding a seat in the House of Commons among all those stuffy British men to Leader of the Conservative Party and eventually as the first (and only) female Prime Minister. The film refuses to really take a side on Thatcher’s conservative politics, but it doesn’t skimp on showing the outpouring of dislike amongst the lower class. The film eventually depicts the Brits entering the Falklands War and Thatcher’s involvement in the conflict. Those expecting a history lesson here will be disappointed as the film is more interesting in showing the elderly Thatcher deal with these memories, instead of making a political statement about them.

Like I said, and many other have as well, the main attraction here is Streep’s magnificent performance. In her scenes as the younger Thatcher she commands the screen similarly to how she did in “Doubt” and “The Devil Wears Prada.” I found it interesting that Thatcher had to go through vocal coaching which helped her get noticed in a room full of shouting men. If you can forgive Thatcher for her politics, you’ll see the story of a woman trying to make it in a world run by men. But the real showcase here is the elderly Thatcher which, with the help of a tremendously convincing make-up job, is just fascinating to watch. Streep gets every nuance right. She really moves and acts like an old woman; it’s almost disturbing.

“The Iron Lady” isn’t the most in-depth bio pic I’ve ever seen as it’d rather spend time showcasing Streep’s wonderful talent of acting like an elderly old lady who’s losing her mind. The film feels almost too self-important to be completely involving, but Streep’s performance is pretty hard to dislike. She never needs to overact which is good. “The Iron Lady” at times sort of feels like it should be a musical (in the way the film relies on montages to skim over history that would otherwise be explored further in a different film), but the scenes with song were cut at the last minute. I think that’s due to the limitations of its director and I can’t say I know that much more about Margaret Thatcher after seeing this movie, but that shouldn’t prevent you from witnessing one of the best screen performances of the year. GRADE: B