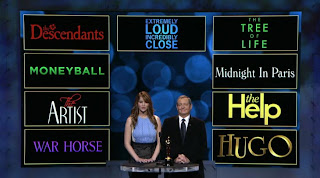 Updated Tuesday morning: So the nominations have been revealed and the Academy refused to be boring and decided to throw in a few curve balls (some borderline predicable curve balls, but curve balls nonetheless). The Tree of Life and Extremely Loud & Incredibly Close are now Best Picture nominees. Who would have thought? Max Von Sydow made it into Supporting Actor, bumping out hopeful Albert Brooks. Supporting Actress was predicable; I'm glad Melissa McCarthy made it in! The biggest surprise I'm most disappointed by is Michael Fassbender surprisingly not making into Best Actor for "Shame." Not that I'm THAT surprised considering the film's content. Gary Oldman is finally an Oscar nominee. They Academy liked Tinker Tailor Soldier Spy more than most people thought they would. George Clooney is a double nominee for Best Actor and Best Adapted Screenplay for The Ides of March. The Girl with the Dragon Tattoo failed to a Best Picture nom, but Rooney Mara benefited (knocking out Tilda). And A Separation made it into Original Screenplay (as did Margin Call) bumping out yet another Joseph Gordon Levitt movie (50/50). It turns out there were nine Best Picture nominees, and yet, it still feels like there are some filler nominees in there. War Horse made it, yet it failed to get another major nomination.. it was nominated for five other technical awards. "Hugo" leads the way with 11 total nominations, with "The Artist" right behind it with 10. I correctly predicted five categories right: Director, Supporting Actress, Costume Design, Cinematography, and somehow Foreign Language Film. See the full list of nominations here.


Tuesday the 24th is Oscar nomination day and it's the second greatest day of the year (the first is the Oscars on February 26th). Holy crap. How strange is it that we not only have to try to predict which films are nominated for Best Picture, but HOW MANY get nominated as well. The Academy changed the rules (yet again) so that there can be either five Best Picture nominees or ten Best Picture nominees – or any number in between. A film has to receive AT LEAST one first place vote to at least be considered – there go your chances “Human Centipede 2” – and must receive 5% of first place votes to be nominated. So depending on how many votes particular films get there can be anywhere from five and ten films nominated for Best Picture. So let’s get to it!

Best Picture
The Artist
The Descendants
The Girl with the Dragon Tattoo
The Help
Hugo
Midnight in Paris
Moneyball
War Horse
I believe there will be about 7 or 8 nominees, but wouldn’t be absolutely shocked to only see 5 or 6. The Girl with the Dragon Tattoo was on a sort of Guild Award roll the past couple weeks which significantly helped its chances in the overall race – I think it can get in, but I wouldn’t be shocked to see it left off. It would certainly fit into the Academy’s recent trend of rewarding gritty, violent fare – although it would have zero chance to win. But the academy loves them heart tugging as well which is why movies like The Artist, The Help and even War Horse feel like guarantees – although War Horses chances have been waning and I wouldn’t be shocked to see it miss here. But I think this list of 8 is the most likely scenario. If this was the old days, and there were only five nominees they would most likely be The Artist, The Descendants, The Help, Hugo, and Midnight in Paris.

Ugh, I’ve toyed with this category for too long, and I’m still not 100% happy, oh well. With a very high chance of more than five best picture nominees, it seems odd that a director would be nominated without at least its film not making it into best picture – but the one director where I can see that happening is with Terrance Malick. “The Tree of Life” is one of the most divisive films of the year – heck, of the decade. Love it or hate it, no one will deny it’s sheer scope and vision, even if you think it’s the most self-indulgent piece of over-praised pretentiousness you’ve ever seen. His DGA is kind of surprising – until you remember that a majority of the membership is part of the TV community and tend to favor less epic works (which is why Spielberg was snubbed there too). I’m not exactly sure who will be left off, but my guess, and it’s merely a guess is that the Academy will favor Malick over Fincher. Spielberg could easily show up here – but I still find the guilds’ lack of War Horse love kind of surprising.

I’m pretty confident in this list, but I wouldn’t be shocked to see a surprise nomination for that foreign guy from “A Better Life” who got a SAG nod, Gary Oldman for “Tinker Tailor Soldier Spy,” or even Michael Shannon, who loves to show up unannounced (“Revolutionary Road”). If anyone seems vulnerable it’s got to be Fassbender or even DiCaprio, who’s had to deal with his film being critically maligned over the past month.
Best Actress
Glenn Close "Albert Nobbs"
Viola Davis "The Help"Meryl Streep "The Iron Lady"
Tilda Swinton "We Need to Talk About Kevin"
Michelle Williams "My Week with Marilyn"

I’m even more confident in this list than with the actors. Unfortunately both Charlize Theron and Rooney Mara will have to settle for at least getting Golden Globe nods.
PS – I know the eventual race is between Meryl Streep and Viola Davis - but what if, just what if, the “young pretty thing” Michelle Williams pulls off a big upset?

Oh dear Lord this is the weirdest category to call. I wouldn’t be surprised if the Academy came up with five completely different actors. Various groups have spread the wealth for this year’s supporting actors which has made for an interesting if not difficult to predict award season. Plummer is definitely in – it’s practically his to lose. I never really thought Jonah Hill could go all the way, but it seems like he will after getting nominations from all the requisite groups – BFCA, Golden Globes, SAG, and BAFTA. At this point if he didn’t make it (like Mila Kunis last year) it would definitely be a snub whether he deserves it or not.

BAFTA placed Bérénice Bejo in the lead category, but I think she’ll end up here. The big question remains whether Melissa McCarthy will be nominated for her hilarious turn in “Bridesmaids” a type of film that is usually way off the Academy’s radar. She is wonderful in the film (as is everyone) so if she does get nominated it won’t just be for “shitting in a sink.” Unfornately a nod for her means the young Shailene Woodley who is really good in “The Descendants” will be left out – unless she takes Janet McTeer’s place which could very well happen.

This is a category – like many this year – which feel like it has four definites and one that can go any which way. That spot would be the one I feel will be occupied by “The Girl with the Dragon Tattoo” assuming that it gets nominated for best picture. Of course “Tinker Tailor Soldier Spy” could get in there and would be guaranteed if it was Most Confusing Adapted Screenplay.

If the Academy nominates the above five films for Best Original Screenplay it will be one of the rare occasions in which the five screenplays nominated would all be comedies. In fact, after checking the Academy’s database it seems this could be the first time – although some of these films have elements of drama, they’re mostly comedies. And how awesome would it be for Kristin Wiig – the Target Lady herself – to be an Oscar nominee? If anything gets bumped out it’ll be for Diablo Cody’s wonderfully witty and acidic script for “Young Adult” – although I’m wondering if foreign film frontrunner “A Separation” could squeeze out one of these five comedies. The writer’s branch is notorious for including foreign films in this category.
Best Art Direction
Anonymous
The Artist
Hugo
Harry Potter & the Deathly Hallows – Part 2
Jane Eyre
Best Cinematography
The ArtistThe Girl with the Dragon TattooHugoThe Tree of LifeWar Horse
Best Costume Design
Anonymous
The Artist
Hugo
Jane Eyre
W.E.

I'm not sure why but this weblog is loading very slow for me.
Is anyone else having this problem or is it a issue on my end?
I'll check back later and see if the problem still exists.

Thanks in support of sharing such a fastidious thought, post is
nice, thats why i have read it entirely

I got this web site from my friend who informed me concerning
this website and at the moment this time I am visiting this site
and reading very informative posts at this time.