The Parent Spat: “Carnage” is a Decet but Stagey Ensemble Comedy 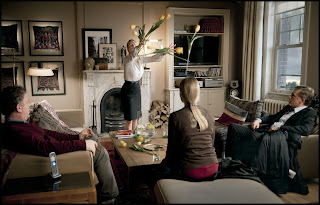 The sight of Kate Winslet projectile vomiting is worth the price of admission to “Carnage.” As an actress known for her more dramatic work, it’s always fun to see her let loose a little, kinda like Meryl Streep. But besides the rare comedic side of the British actress, “Carnage” remains a mostly awkward and unrealistic comedy about parents to quickly delve into absurdly childish behavior. The film is based on the play "Le Dieu du carnage" (The God of Carnage) and all takes place in real time with just four characters over a swift 80 minute runtime. Jodie Foster and John C. Reilly are the Longstreets and Christophe Waltz and Winslet are the Cowans. The Cowans’ son hit the Longstreets’ son with a stick, which resulted in some tooth damage, and the two couples have meet up at the Longstreets to work it out. What follows is four adults to become increasingly childish over the next hour as the four people air dirty laundry and other personal quirks which become apparent. It’s amusing and all expect for one big problem: there is no reason for the Cowans to hang out with the Longstreets for such a long period of time.

And thus lies the inherent problem with adapting a stage play that only features four characters in one location. How do you get them to stay together? In the fantasy world of live theater this works; on film however, it can be uncomfortable. Director Roman Polanski, known for films like “Rosemary’s Baby” and “The Pianist” is obviously fascinated with directing four actors in such close quarters and he makes things as visually interesting as he can (some cool shots with mirrors ensue). However, you have to look at this first and foremost as an actor’s piece, which is obviously what drew all of these wonder actors to the project in the first place. Foster is a slightly uptight, micromanaging mother and her husband is more of laid back type of guy. The cracks in their marriage become more pronounced as the film progresses. Winslet and Waltz are your average uppity snooty couple who think they’re better than everyone else – although they’re initially apologetic about their son’s violent act – after awhile they realize how tempting it was to hit a Longstreet in the face.

The film begins with a brief scene that –without words – shows us the adolescent spat in the park and cuts to the New York City loft where the two sets of parents are composing a document about their son’s incident. The Cowans have been invited over and are apologetic, but Penelope (Foster) seems rather hurt, as any mother would be, that her son was attacked. The Cowans, in any other reality, would leave the apartment rather quickly at the conclusion of this meeting – but Penelope and Michael (Reilly) insist they stay and have some apple and pear cobbler. Soon after Nancy (Winslet) develops a bit of a stomach ache and then vomits all over the coffee table, nearly ruining Penelope’s art books. This incident sets into motion the next hour of bickering and childish actions that take over once the adults begin blaming each other for their sons’ behavior.

I still think that after projectile vomiting all over the living room Nancy and Alan (Waltz) would want to get the heck out of their. And besides Alan is such a busy man – he’s a lawyer – he keeps getting important calls on his cell – which naturally ends up in a water filled vase, if he had just left the apartment, there wouldn’t be much of a movie. I still maintain that this story is better left to the confines of a stage rather than endless possibilities of film. I applaud the wonder ensemble and their interesting performances – although some might complain Foster is a bit over the top, I found her delightful if a bit caustic. Everyone gets a moment to shine but the best one here is Winslet – she’s reason alone to see it. Polanski co-wrote the film with the play’s original writer Yasmina Reza and result is an obviously good attempt to bring the hit play to the world of cinema – but overall it feels like a slight misstep. GRADE: B-

Hi there! Quick question that's completely off topic. Do you know how to make your site mobile friendly?

My web site looks weird when viewing from my iphone.
I'm trying to find a theme or plugin that might be able to fix this problem.
If you have any suggestions, please share. Thanks!

Feel free to surf to my web-site Inverter Yaskawa