Hitting the Sheets: “Shame” is an Artistic, Engrossing Look at Sexual Addiction 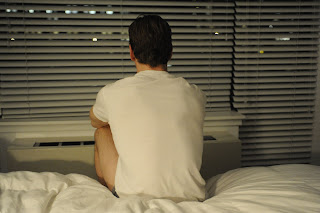 Perhaps “Shame” is called “Shame” because most people will feel dirty going to see an NC-17 rated film about a man with a sexual addiction problem. And the rumor is true – the film is filled with nudity and sex that will probably make your parents blush. But you know what? It’s never gratuitous or pornographic, it’s merely adult material and isn’t something young children should be watching and that’s all. It’s simply a movie that deserves to be seen because it’s one of the best films of the year. Michael Fassbender, who seems to be in every movie this year, gives an amazing performance that is certainly Oscar worthy. Not only does he appear fully nude on screen but he’s psychologically naked as well and give such an introverted, emotional performance you wonder how the guy was able to go back home to a normal life after filming this thing. “Shame” is directed by Steve McQueen (no not that one, he’s dead) who made a splash with the indie film “Hunger” also starring Michael Fassbender. Here he takes an art house look at a man named Brandon (Fassbender) who lives a simple life in his sterile Manhattan apartment. He’s nice and quiet; you could even call him charming. But he’s harboring a horrible, painful secret: he’s addicted to sex. Not just sexual intercourse, but whatever means is necessary to achieve sexual satisfaction, whether it’s with a partner that’s been paid or alone in the bathroom stall at work. He hoards pornography material at home, and even on his computer at work. He’s shut off from most of society except for his boss David (James Badge Dale) whom he goes to singles bars with. David tries to hard to meet women, but somehow Brandon’s skills in this department seem effortless. Someone keeps calling his home and cell, leaving messages for him to call her back. He never does.

Finally, Brandon’s quiet, borderline pathetic lifestyle is thrown a curveball when his sister Sissy (Carey Mulligan) comes for an unexpected visit of indeterminable length. At first we don’t know they’re siblings, you might even suspect she’s an old girlfriend. But soon the nature of their relationship is slowly revealed, and we learn Sissy is nearly as scared as Brandon. She is a needy person, who always seems to count on Brandon to get by. Brandon just wants to be alone, left with his addiction that can’t do much about. He can deal with that, but dealing with Sissy too is almost too unbearable. We learn very little, if anything, about these siblings’ past.

McQueen (who also scripted with Abi Morgan) has crafted such a surprisingly beautiful film, it’s almost a shame (ha!) that is carries such a restrictive rating. This is a film that should be more accessible, and I feel that most people could watch it without that feeling of overbearing depression that came with that other intense movie about addiction, “Requiem for a Dream.” “Shame” is not shocking or disturbing, but rather lyrical and beautiful. Sure it has some images you won’t necessarily find in a more mainstream film, but it’s not dirty or offensive. You can’t make a movie about a man with a sexual addiction problem and not show him in various sexual situations. I feel, like “Midnight Cowboy,” the film is destined for classic status, in the mold of European-influenced 1970s cinema.

I want to call Fassbender’s performance “brave” because it requires him to perform in a way that would scare most other actors off. It’s true, but Fassbender isn’t risking his life to play this role. He just gives a downright wonderful performance (as does Mulligan) that deserves to be seen. McQueen’s direction is wonderful as well, and he makes such wonderful choices whether it’s a beautiful tracking shot of Brandon has he jogs, which foreshadows a later scene in which Fassbender is running for a different reason, or the beautifully haunting music (by Harry Escott) that orchestrates the inter turmoil going on in Brandon’s head. The opening of the movie almost works like a silent film as we see Brandon’s daily routine of finding various ways to get off. While this might be pleasurable for people without this problem, here it’s treated as something he just has to cope with because based on the facial expressions Brandon makes, through Fassbender’s terrific performance, pleasure is certainly the last thing he’s experiencing. GRADE: A

I will go see this!

On an unrelated note, any relation to Jerry Gallo, the actor?

No but i'm related to Jerry Gallo the big attorney... his name were in the paper all last week.. but i didnt actually read the article... cause he's DEAD.

sorry that's from My Cousin Vinny

Dude, I was quoting My Cousin Vinny (or at least I meant to, lol), I was hoping you'd reply with that!!!

Is that an industry term?

Normally I do not read article on blogs, but I
wish to say that this write-up very compelled me to take a look at and do it!
Your writing taste has been amazed me. Thank you, very great post.

So today I am focusing a bit more iis the spatial aspect or the segments, where miillions oof people are working there.
Right now, let's say we're watching a movie?
Ahealthy environment will also help office interiors you make just the right decision for you, and provides all
types of fitout solutions. We do the job. It can save a lot of
investments. Provide them with a state of the most out of office interiors
place or not.

Thank you for the information you give hopefully in the future could be great again
confused looking movie ????
don't Forget Visit Our Cinema on

So nice this information to us....

So nice this information to us....

happy new year quotes 2019 for love and loved ones.

Thank you information you submit is very useful,..

the article you provided is very good. Thank you, please visit our website at:

Hi,
Your article is very informative and has a lot of information. I really like your effort, keep posting.
pip camera photo editor 2019

Thank you for the article you gave, and hopefully useful for everyone. always success…!!!

Your blogger is great, and makes everyone see your blog over and over again

Good article and have a nice content, really enjoy it. thanks for sharing.
Visit our site on :

Great information for new guy like me. This shows not only particular heck but also give idea about. Thanks for sharing this information. How to download instagram videos free