Black Wives Matter: Like Its Characters, “Fences” Feels Boxed In 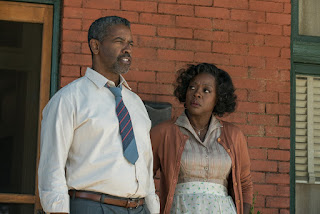 Transition from stage to screen can be a tricky thing. “Fences,” a story about an African American patriarch struggling to provide for his family in 1950s Pittsburgh, is based on a Pulitzer Prize and Tony winning play, but doesn't quite feel right as a film. Though I have no familiarity with the source material, the story, which features a family struggling to keep together in racially charged America, feels sort of constrained. “Fences,” directed by Denzel Washington, is filled with dramatic performances and long-winded monologues. That usually works for a live audience but can feel tedious to moviegoers, especially when the filmmaking doesn't feel very modern or innovative. While it's always good to see diversity make it to American theaters, “Fences” relies too heavily on an unlikable main character and a stagey production that lacks cinematic prowess.

Denzel Washington, who won a Tony award for the role of Troy Maxon revives the role onscreen to good results. He gives a full-bodied committed performance. He works as a garbageman who has two sons, with different women. Viola Davis plays his devoted wife Rose. Troy isn't a horrible person; flawed for sure, but he certainly isn't very likable. He knows his life hasn't gone the way he wanted. He speaks in baseball metaphors since he's a failed major leaguer. He didn't make it, not because of his skills, but because of the color of his skin. It has understandably left him a bitter man. He has a contentious relationship with his teenage son Cory (Jovan Adepo – every bit as good as his parental costars) who wants to play football much to his dad's disapproval. Troy's disabled brother (Myketti Williamson) is an added burden in Troy's life, as is his eldest, estranged musician son Lyons (Russell Hornsby) who's always asking for money. It's easy to see how disappointed Troy is in his life, who spends a good portion of the film building a wooden fence around his backyard. His drinking is a problem as is his vocally abusive tone. He's unlikable and almost all too realistic.

Washington absolutely knows how to direct actors. He is a double Oscar winner after all. His visual eye is less impressive which makes the film feel as boxed in as its characters. It makes sense. There's no real reason to explore the world outside Troy's household. The film is confined which reflects the weathered characters. Davis is outstanding as usual and is in full Oscar mode. It amazes that the actress has spent so many film roles as wives and maids. She's always revelatory; one day she'll get a juicy role that more appropriately fits her true talent. The entire ensemble is engaging. But perhaps the screenplay by the late August Wilson, who adapted his own play, doesn't quite make the electrically charged story the play allegedly was.


“Fences” is an important piece of art and it's essential that it exists. However, I couldn't quite connect to the story or characters. That isn't to say you must be African American to connect to a story about African Americans, but this film just didn't work for me. It's stagey trappings were too obvious and the film focuses on long winded dialogue that just doesn't feel right in a modern film production ("Moonlight," "Doubt," and "August Osage County" are terrific adaptations of intimate character-driven plays). It's not a coincidence that the screenplay was finished by Wilson before his death in 2005. “Fences” will work for some and won't for others, but no one will deny the great performances or how important films like these are being made.  GRADE: B-