A New Hype: Felicity Jones is a Rebel With a Cause in “Rogue One” 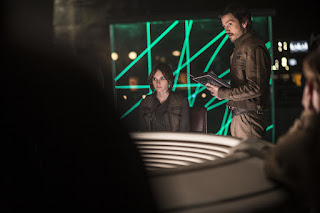 What can be said about the most hyped film of the year except omg you guys it's finally here!! So is it any good? Yes it's very good. Though your enjoyment of the film will be based entirely on how much of a hardcore Star Wars nerd you are. I'm a mild level Star Wars nerd, meaning I have no real allegiance to the films which is evidenced by the fact that “Revenge of the Sith” was my favorite Star Wars film until “The Force Awakens” came around. Having said that, some may find “Rogue One” to actually be better than “The Force Awakens” since it aligns more with the original trilogy and because it sort of does it's own thing (instead of being nostalgically parallel to “A New Hope” which many complained about). This new film stands on it's own by telling the story of how the rebels got a hold of the Death Star's plans which became the McGuffin in “A New Hope,” but the film's first half isn't all that interesting to someone who knows very little about the Star Wars universe and therefore feels a bit uneven. Having said that, “Rogue One” eventually becomes a thrilling heist film in its final act and is extremely fun in its execution. Star Wars nerds rejoice!

This is the first live action stand alone Star Wars film and Disney, who now owns Lucasfilm, is in great shape of giving audiences well-crafted space operas in the style of the films everyone fell in love with a long time ago. Director Gareth Edwards, who put his stamp on the “Godzilla” franchise in 2014, makes an admirable helmer this time around and has given his film such a great, old school look and feel. Gone is the digital cleanliness of the much maligned and, let's be honest, ultimately underrated George Lucas prequels in favor of a grittier 70s look. Sure there is plenty of CGI some of which is incredibly well used which includes bringing a dead actor back to life.

“Rogue One” tells the story of Jyn Erso (Felicity Jones) who becomes part of the rebel alliance against the evil imperial empire. Her father had worked for the empire in creating what eventually became known as the Death Star, a planet sized space station capable of destroying entire planets. She joins a ragtag team which includes Diego Luna doing his best as a Hispanic version of Han Solo, Alan Tudyk's voice doing his best C-3P0, and others including Donnie Yen as a blind warrior who believes in the force. The film's first half, spends a lot of time jumping around from planet to planet with characters talking about stuff I couldn't really care much about until they made references to the other films. Finally some familiar faces show up which I won't spoil here but it all works really well.


“Rogue One” is a fun movie. It's actually quite grim and dark since it's essentially a war film with an entertaining heist element in the final act. Since it's a prequel we sort of know how it's all going to play out and we know most of these characters don't live long enough to be the stars of “A New Hope” but it's certainly a fun adventure especially for those who really care about this stuff. I still prefer the large-scale fun of “The Force Awakens” but “Rogue One” is certainly a fun one-off adventure that will satisfy those salivating for a galaxy far, far away.  GRADE: B