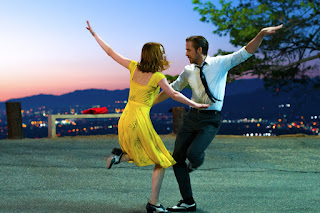 If you look up the word ‘delightful’ in the dictionary you’ll probably see the poster for the new movie “La La Land.” The romantic movie musical is every bit as fun and enjoyable as you’ve probably heard. You know how Quentin Tarantino is really good at taking a particular genre and reworking it for modern audiences? That is exactly what Damien Chazelle has done to the old school movie musical. The director, hot off his feature film debut “Whiplash,” returns to what he seems to know best, the word of jazz. He gives us a story about hopes and dreams in modern day Los Angeles. And it’s all set to impressively staged musical numbers including a brilliant long take opening sequence set in a traffic jam on an LA highway overpass. It’s literal movie magic and there’s not a single magic wand in sight.


Emma Stone and Ryan Gosling have proven that they have incredible chemistry since this is their third film together (following “Crazy Stupid Love” and “Gangster Squad” for those keeping track). Stone is Mia a studio backlot coffee shop barista who aspires to be an actress and Gosling is Sebastian, a jazz pianist who dreams of hitting it big and opening his own jazz club. One thing leads to another and they fall in love, yada yada yada. There’s nothing particularly innovate about the story however, it’s how well its executed that really makes it something special.


The film is filled with jazzy original songs from composer Justin Hurwitz who really set the tone of this irresistible movie. There’s a catchy opening number set on a highway and intimate moments in which the actors pretty much just sing straight to the camera. The music is wonderful; especially when the characters randomly start dancing in various LA spots like the Hollywood hills or the Griffith Observatory. Other people show up here in there including Oscar-winner J.K. Simmons, Rosemarie DeWitt and even John Legend. But this is really a two person show and Stone and Gosling are exquisite. It’s nothing too out of their range, but with all the singing and dancing their talent is obvious in every single frame.


“La La Land” is sometimes an altogether different thing from “Whiplash” and yet it has many similarities. You get the sense of how important and influential music is to Chazelle. Both films are about dreams and aspirations. It’s obvious that “La La Land” is a nostalgia trip down old Hollywood memory lane with references to “Rebel without a Cause” and the fact that it’s been presented in Cinemascope. But it doesn’t get bogged down in nostalgia; even if it has an old school feel it’s extremely contemporary as well. It’s really quite something special.


Fans of musicals should dance their way to “La La Land.” It’s an incredibly fun – and funny – film that’s impressively acted and has unique and well-directed musical numbers. It could have used at least one more music number somewhere in the third act, but it’s a minor quip in a terrifically entertaining and classy film that will restore your faith in the original movie musical.  I’m impressed how much Damien Chazelle has gotten me to respect jazz music with just two films.  GRADE: A

This article is really fantastic and thanks for sharing the valuable post.
sushi-cat2.com