Hailee’s Comic: “The Edge of Seventeen” Expertly Straddles the Edge of Comedy and Drama 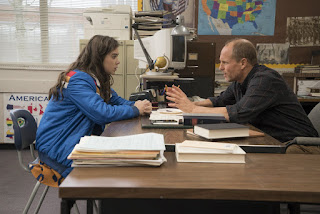 “The Edge of Seventeen,” a new teen comedy-drama from writer/director Kelly Fremon Craig is easily the best teen film since 2007’s “Juno” (nothing against the wonderful films “The Perks of Being a Wallflower” and “The Spectacular Now”). And even those who weren’t convinced by “Juno”s overly-hip treacle will be happy to know that the pregnant-less “Edge of Seventeen” is a much more realistic look at high school and the nightmare that is coming of age. Hailee Steinfeld, previously Oscar-nominated at age 15, is simply superb as Nadine, who has to not only deal with the death of her father at an early age but traverse the complicated world of high school and all the stupid drama that comes with it. “The Edge of Seventeen” is a moving drama that can be hilariously funny and gut-wrenchingly sad, sometimes in the same scene, and stands out because of its realism, honesty, assured voice from its female helmer, and a simply wonderful cast. It’s easily one of the best teen films of recent memory.

Don’t let the fact that “The Edge of Seventeen” is a “teen film” deter you from seeing it. Every adult alive right now has been the age of seventeen before and will relate to the film in some way. Nadine is one of the more interesting teenage film characters in quite some time. She’s not really that popular; she doesn’t think she’s very attractive. She’s sort of “plain.” Her older brother Darian (Everybody Wants Some’s Blake Jenner) is pretty much the Golden Child and seems to have it all. Which is why Nadine practically goes insane when her best – and only – friend Krista (Haley Lu Richardson) begins to date her brother. Krista might as well be dating Hitler in Nadine’s eyes. She’s a traitor; a Benedict Arnold. She can hardly turn to her own mother (Kyra Sedgwick) who doesn’t seem to “get” her own daughter. At this point Nadine can really only turn to her history teacher Mr. Bruner (a terrific Woody Harrelson); they seem to have one of those special teacher-student relationships that only seem to exist in movies. But then things look hopefully for Nadine when she befriends the nerdy, awkward kid who sits next to her in class.

This isn’t just any other “teen movie” and that’s because writer/director Kelly Fremon Craig – an exciting new female voice – doesn’t really hold anything back. She presents delightfully edgy material here, like the surprise death of a parent, which gives the film an authenticity that most movies about teenagers can barely muster. All of her characters feel distinctive. They don’t all sound the same – a somewhat fatal flaw for Juno’s dissenters (not me, I’m a fan of that film), and each character has their own life problems and situations to deal with. The film centers around Nadine as she comments about her “terrible” life which feels superficial until you realize that many felt that way as a teenager. Craig is also not afraid to actually make her lead character have – gasp – flaws! Sometimes she makes bone-headed decisions but we stick with her anyways because we care about her and want her to eventually correct her course.


“The Edge of Seventeen” is simply a delight from start to finish. It has an almost joyous sense of humor and it rides just along the edge of dark humor without going overboard. It’s sometimes brutally honest and features wonderfully engaging performances from the entire cast. Steinfeld is simply stunning here – definitely award worthy material for what it’s worth. Craig has such a keen eye for telling interesting stories in bold, new ways, I’m excited to see what else she has in store for us.  GRADE: A


Trailer for The Edge of Seventeen on TrailerAddict.
Posted by Chris at 4:28 PM