The Suck Zone: Ranking All the Tornados in “Twister” 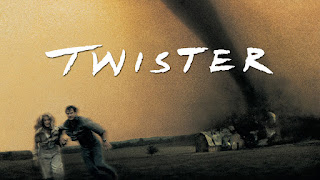 It’s no secret that “Twister” is my favorite disaster movie of all time (weather-related or otherwise) and one of my favorite and most well-remembered movie-going experiences as a kid. I recall May 10th 1996 so vividly, like it was yesterday. So how could I not celebrate its release every year? Especially since “Twister” officially turns 21 today. And since I love making movie lists just as much as I love watching the movies on said lists I’ve decided to delve deeper into “Twister” than I ever have before. This is the definitive ranking of all of the tornadoes that show up throughout “Twister.” Yes, I am serious. And don’t call me Shirley.


This is without a doubt my favorite tornado in “Twister."  This is also the first actual twister we see onscreen. I love how much personality it has: its skinny shape and those camel sound effects are great. The entire ditch scene is fun and it was a centerpiece of the film’s effective advertising campaign. Everyone always remembers their first and since and this was always one of my favorite scenes in the movie because, like the Tyrannosaurus scene in “Jurassic Park,” it’s the first time we actually see the villain attack the main characters.


This is a great scene because it’s sort of a mix between the unseen twister in the film’s opening and the steady and monstrous one in the finale. And it’s a constant reminder that twisters even happen at night and are almost impossible to see. The gang is checking out a double bill of Psycho and The Shining when a twister approaches right when Jack Nicholson is chopping down the bathroom door. It must not be a Kubrick fan. Everyone must take shelter in a garage where cars are flung at them as the movie screen dissolves before our eyes. After this experience Bill's fiance rightfully bounces.


This is the mother of all twisters, an F5 on the outdated Fuija-scale, only previously witnessed by Jo in the opening scene as a child. This twister also lasts for an unprecedented amount of screentime and eats a lot including DOROTHY III,  a tractor trailer truck, the villainous Cary Elwes, and lots of farm tractors. Though it can’t rip Jo and Bill from the ground because of the superhuman leather belts they found. We get to witness the core of the tornado and are satisfied with the fact that Jo has gotten to experience a twister from the inside. It’s super deep.


All great movies open with a scene in which the monstrous villain attacks but we can’t really see much. Steven Spielberg proved this formula works in “Jaws” and it works here and countless other times. Little Jo heads to the storm shelter with her parents and Toto-lookalike Toby only to witness her father get sucked up through the weakened storm door. It’s a traumatic moment for the character that defines her and it sets the pace for the spectacle that is about to await us.


5 - Double Waterspout Twister aka “We Got Cows” Twister
via GIPHY


Probably one of the more well-known twisters from the film are the infamous waterspouts that fling the cow around.  As our heroes and the hapless Dr. Melissa Reeves drive over a bridge the tornado follows and splits into two (“We got sisters!”). It’s traumatizing to Melissa but Jo and Bill act as if they just saw the second coming of Christ. It’s a fun sequence but besides being made of water these twin twisters don’t have much going for them and don’t last very long.


Speaking of not lasting long, the last twister on this list is sort of pathetic. It shows up long enough to rip some telephone poles down and murder DOROTHY II in the process but other than producing some large chunks of hail it’s over much too quickly. We see the clouds churn like a fresh batch of ice cream only to have a funnel appear for mere seconds. At least Dusty gets to be getting a lot out of it by using his telephoto lens. Melissa, is yet again, not impressed - mostly because this tornado begins to signify the end of her relationship. Bummer. Welcome to the suck zone indeed.
Posted by Chris at 3:05 PM