Strangers on a Train: The High Speed Thriller “Unstoppable” is a Triumph of Energetic Suspense 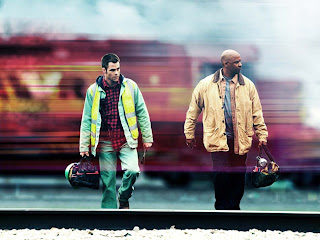 Great Scott! Finally, we have a movie that fits director Tony Scott’s frenetic directing style. His camera is always moving this way that way, zooming in zooming out. And since “Unstoppable” is about a train that wont stop, his herky jerky camera perfectly fits the story of a runaway train and the inevitable disaster that awaits if it wasn’t stopped. His camera constantly has momentum and that’s exactly what we’re given here in a movie that doesn’t stop to take a breath (and neither will you). “Unstoppable” is a great action movie because it gets everything right. It gives us characters to root for, it gives us suspense, cool action scenes filled with plenty of crashes and a great sense of timing and pace. It’s really just one long awesome chase scene. In fact, this could have been and should have been “Speed 2.”

Something I have to say upfront and I know it may sound ridiculous is that one of my favorite aspects of this movie is the way Tony Scott gives the train personality. This train as seen right at the start during the opening titles just sort of looks – evil. The train is given a level of malevolency I’ve never really witnessed in an inanimate object. Not since Spielberg’s tractor-trailer truck in “Duel” has a vehicle been so menacing and ominous. The way it’s shot and lit and the moody music that blares on the soundtrack, just gives us a feeling of doom. You know something scary is going to go down. After being introduced to train number 777, we introduced to some human characters which includes Will (Chris Pine) who’s a young and recently trained railroad conductor. He’s set to work with train engineer Frank (Denzel Washington) by doing some industrial freight train stuff. Meanwhile a sort of clumsy railway worker accidently lets his train get away from him where it slowly begins picking up speed, enough so that the poor goof can’t climb back on board. Freight train 777 (which is a half mile long and pulling loads of hazardous chemicals behind it) is on an unmanned course of destruction through southern Pennsylvania ready to destroy anything or anyone who gets in its path.

It’s really amazing how simply this whole story is and how well it actually works. You can’t help but think along the lines of, “how does this happen.” Well it did, because this is based on a true story. Of course many liberties were taken with the actually events, because let’s face is this is just a fun popcorn movie, not a biopic about the guy who freed India from British rule. Scott places all sorts of things in the train way including a train of school kids on a field trip and our hapless heroes Will and Frank. We do get a little backstory as the film progresses. Enough to make us care but not too much where we’re constantly wanted to see what train 777 is up to. Frank is being forced to retire while the corporation who owns the 777 train is intend on replacing older works with fresh blood like Will. Train dispatcher Connie (Rosario Dawson) is the one who makes the most rational decisions she can make as she watches the train barrel mile and mile through populated towns. The news media have a field day capturing the runaway train on their skycopters ready to capture anything that gets in the train’s way. It looks like Frank and Will might be Connie’s only hope to stop the train and it’s simply a fascinating experience to see how they’re going to do it.

“Unstoppable” is simply a wonderfully suspenseful action thriller. However it’s not just mindless. Am I the only one who thinks there’s more here than meets the eye? Could the unmanned train perhaps represent our current economy chugging out of control with the once seemingly secure American way of life headed for utter disaster? Maybe I’m looking too deeply here because let’s face it this is still just a well-executed action thriller. It's about ordinary people caught in an extraordinary situation. I’m still not quite sure how Scott was able to get some of the shots he did get, but one thing I’m certain of is that this is a movie worth catching up to. GRADE: A-