The Rock: “127 Hours” is a Fascinatingly Harrowing Tale of a Man’s Struggle to Survive 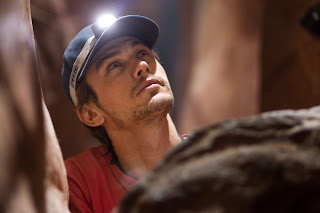 I wasn’t so much of a fan of Danny Boyle’s “Slumdog Millionaire” when it premiered back in December of 2008, but his follow-up “127 Hours” is where it’s at. It’s so emotionally wrenching, disturbing and yet beautiful my eyes were completely glued to the screen. I sat there transfixed for 93 minutes while the true life story of Aron Ralston, played magnificently by James Franco, unfolded before my eyes. He was, and still is, a free spirit. He’s a young guy always looking for another great adventure (similar to Chris McCandless of “Into the Wild” fame, but portrayed as more likable) until he gets caught in the crevice of a canyon; a gigantic boulder pinning his arm to the rock wall. He’s trapped for days and yes we know he survives (Ralston’s memoir is the basis for the film’s intense screenplay by Boyle and Simon Beaufoy), but it’s witnessing his ordeal that makes this movie just so captivating to sit through.

We don’t get to learn too much about Aron before he sets out on his mountain bike ride and his rock climbing trip in Blue John Canyon in Utah. He’s by himself and he doesn’t tell anyone where he’s going. He meets up with two strangers. A pair of young girls (played by Kate Mara and Amber Tamblyn) are also out hiking for the day, although they’re not quite as knowledgeable as Aron. They agree to hang out with him while he shows them around. They even spend some time swimming an underground crevice. They part ways, but not before they invited Aron (who they obviously feel attracted to since he’s so charming) to a party they’re having at their place the next evening. They’re even having a giant inflatable Scooby Doo. Aron won’t be making it to the party. Just a short time later a loose boulder pins him. At first he’s surprised and shocked and then the realization sets in that that rock isn’t going anywhere. Neither is he.

Aron is forced to sit there, or stand there rather until either someone find him or he dies. There’s another solution but Aron doesn’t think of until it becomes a last resort. Aron is a smart guy. He’s an experienced climber and has some equipment at his disposal. He’s got ropes and climbing gear, he has nearly a full bottle of water (sometimes Boyle brilliantly gives us his water’s POV), although he gulps down most of it pretty quickly, not anticipating being stuck for so long. It’s not long before he begins to have strange dreams and then straight up hallucinations. He sees his family and friends. He sees the mistakes he made in life as one would do if you were on the brink of death. He even has a video camera to document his incident. He even says his goodbyes. It’s heartbreaking. But you can’t underestimate a human’s will to survive. Or their ability to drink their own urine to stay alive or eventually, in Aron’s case, resorting to self-surgery. Bear Grylls has nothing on this guy.


Boyle bring such much energy to a story about a man who can’t move it’s almost unbelievable. The film is so kinetic with all his fancy editing and close-up and jittery camerawork. It’s almost an exhausting experience and you begin to feel what it might be like to be in Aron’s shoes. Boyle implements such wondrous cinematic techniques such as splits screens, beautiful visuals, a great score by A.R. Rahman and such a superb use of music and sound. There are sounds, used in the film’s later scenes once Aron realizes what he must do to survive (which includes amputating his own arm), that are so chilling they sent a tingle down my spine. There are images seen here you probably haven’t seen anywhere else and you’re all the better for having seem them. And Franco should be commended for giving the best performance of his career.

“127 Hours” is such a magnificent piece of dramatic filmmaking. It deserves to be considered in this year’s Oscar race. There are such wonderful and innovative techniques used here you simply can’t turn away. There are disturbing elements here yes, but they’re never grotesque or revolting or, more importantly, gratuitous. It’s such a triumphant story of endurance and survival it’ll probably make your life seem almost worthless, but it’s such an eye-opening experience - and ultimately uplifting - you just might not be the same after having witnessed it. GRADE: A

A post, as an article, can be about anything and the name does not imply anything. My audemars piguet replica with sponsored content here, is the blandness of it, the lack of personal opinion for sake of the money. Using the original clasp on the rubber strap looks like crap. We seen hideous things no sane person would consider replica rolex but hideous not being treated as the hideous monstrosities they are, and I think that the root of the problem. There are literary ways in which you can call a thing hideous and at the same time keep the sponsors happy. In my opinion, rolex replica straps are somewhat acceptable only in the case when your watch uses a crocodile alligator strap, and you live in a hot climate that could cause your strap to wear out very quickly. Bakelite is not used anymore for numerous breitling replica sale and I think perhaps a little too brittle for a watch bezel. First door handle that meets will be the end of it. I have a vague recollection that he is maybe a musician, but could mention any hublot replica of his if my life depended on it.