The Mourning After: “Hereafter” is a Beautiful Film That Dares to Show us an Afterlife 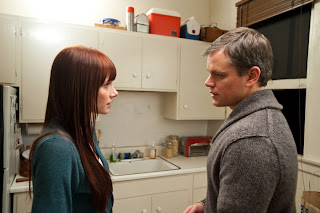 Do I believe in an afterlife? I don’t know. Do many people believe in an afterlife? Yes. Do I believe in an afterlife after seeing Clint Eastwood’s gripping drama “Hereafter?” I don’t know. “Hereafter” is a wonderful film, not only because it’s well made and entertaining, but also because it chooses a divisive subject matter and doesn’t force an opinion onto you. What does Clint believe? What does the writer Peter Morgan believe? You won’t really know after seeing this movie actually because this is a film that says “hey what IF an afterlife exists?” but refuses to say “this IS definitely what happens after you die.” I like that. The film features an interesting plot structure and great performances and some truly heart wrenching scenes of moving drama.

The film actually tells three seemingly unrelated stories, which happen to take place in three different countries (think “Babel”). The film opens with a French woman leaving her hotel room and experiencing a near death experience. A giant tsunami rages onshore killing thousands of people, but Marie (Cécile De France) amazingly survives. Of course she practically drowns and is unconscious for a while, until two guys are able to bring her back with the help of CPR. She experiences strange “visions,” of which she simply cannot shake. Meanwhile, a man named George in San Francisco played by Matt Damon, is nearly always being forced to give people psychic readings. He has to turn people down because he just can do it anymore. He’s a legitimate psychic that we’ll learn later in the film comes from a near death experience he had as a child. He’s now able to communicate with the dead, but for him it’s become more of a curse than a gift. And lastly we’re introduced to a young set of twin boys in England. They’re extremely close, as twins tend to be, but mostly because their mother is a fall down drunk. She means well, and I believe she actually loves her two sons, but she’s a complete mess. And they spend most of their times covering for her so they won’t be sent away. Tragedy strikes however, and one of the boys is in dire need of someone who knows how to speak to the dead…

A somewhat fantastic story, almost supernatural if you will, sounds like an odd directing choice for Clint Eastwood who’s given us such great and poignant films recently. “Million Dollar Baby,” “Mystic River” and “Gran Torino” are just a sampling of his fantastic directing work as of late. Those gritty dramas seem a far cry from a story revolving around the possibility of an afterlife, but his style just simply works for this story. He tells human stories with realist people. And that’s exactly what we get here. We get winning performances from the cast and his sort of gloomy and washed out look that could have easily made the film feel macabre but instead feels just right. Peter Morgan’s original screenplay gives us three fascinating stories which seem like there’s no way they could come together, and yet they do. And whether you think the end of the film is predictable or cheesy you can’t deny the power that Eastwood has built as each story gets progressively more interesting. Even a movie revolving just one of these stories would be fun to watch, but he gives us three!

I was pretty impressed with some of the imagery in “Hereafter.” The tsunami opening is equally impressive and disturbing. The story about the twins is heartbreaking. And you really feel a connection with Damon’s character as we slowly learn what it’s like to live with such a powerful ability. We learn, after he begins a friendship with a woman, played by Bryce Dallas Howard, that even getting involved in a romantic relationship just isn’t very easy for a guy who sees dead people every time he shakes a stranger’s hands. “Hereafter” is a moving and emotional film that, doesn’t make you feel drained (nor depressed), nor does it force any sort of opinion down your throat. It wisely takes religion out of the equation and makes it appealing to everyone, no matter what you believe yourself. GRADE: B+

I think the admin of this site is really working hard for his web page, since here every information is
quality based material.