The Trouble with Hairy: Although CGI, “Tangled” is a Worthy Addition to the Disney Animated Canon 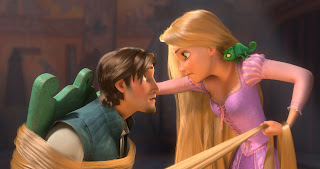 What is it with Disney princesses? They’re always getting into trouble aren’t they. They long for something bigger something greater. Some of them don’t even know they’re princesses. Take Rapunzel as seen here in the newest addition to the Walt Disney Animated Classics collection (number 50 to be exact) “Tangled.” The film’s title is almost borderline dreadful mostly for what it actually represents. The Disney suits were worried that a Disney animated musical about a princess named Rapunzel would not attract of the film industry's favorite customers: boys. So they changed the title and decided to put the focus on the film’s male hero Flynn Rider. He’s a thief with a heart of gold and you won’t be too shocked to find out who he falls in love with.

“Tangled” is a movie musical in the tradition of the greats like “Beauty and the Beast” and “The Little Mermaid” and like those films it centers on a strong female character who wants to know about what’s “out there.” It turns out Rapunzel was the daughter of the King and Queen, but she was snatched away by Mother Gothel (voiced by Donna Murphy). Gothel used the power of this special healing flower to keep herself young and beautiful for years and years. This same flower helped the Queen from dying as she gave birth to her baby. It turns out that magic healing powers were transferred to Rapunzel through her golden hair. With just a song she could harness her hairs powers, which Gothel was jealous of and needed in order to stay young and beautiful forever. She kidnaps the Princess and raises her as if she were her own, locking her away in a tall, tall tower, never able to set a foot into the real world.

That is until Flynn Rider (Zachary Levi) a thief hired to steal the Princess’ crown, stumbled upon the tower and Rapunzel herself. Rapunzel (Mandy Moore) unaware of her royal status is scared of this stranger but intrigued as well. She sends her mother off to find her a unique 18th birthday present, while she insists Flynn take her to see the Queen and King’s floating lantern display, which they do every year on their missing daughter’s birthday. There seems to be a lot of setup for a Disney movie, but there you go. So in the meantime there’s plenty of time for Flynn and Rapunzel to fall in love. And to sing songs of course! Because Disney musical maestro Alan Menken is on hand to write the music for Rapunzel and her co-stars. The songs are well done if not particularly overly memorable and sound like more modernized versions of songs you may be familiar with from the early 1990s. There’s a song about hope and wonder “When Will My Life Begin” and a song about dreams “I’ve Got a Dream” and it wouldn’t be complete if the villain didn’t beak out into song either with “Mother Knows Best.”

“Tangled” is influenced and some might even says it outright borrows elements from earlier Disney films. In fact you can probably name something in this movie you’ve seen before in the other classic films. But those are the elements Disney fans have been holding onto for years! Last year’s The Princess and Frog” represented the hope that Disney could return to glorious form that made those early movies so rich and warm and successful. With “Tangled” they’ve proven that the formula can still work even nearly 20 years later. Sure “Tangled” feels a little more modernized, with computer generated animated and not the hand drawn stuff, but the animation represents animation in the new era. (Actually the advertising for the film actually feels the most modern, what with that Pink song blasting during it). Most people cried foul when films transitioned from black and white to color and in the end that wasn’t all that bad. And I loved how much Rapunzel's hair became a characater of its own. She uses her hair much in the same way Indiana Jones might use his whip.

I still believe Disney can, and will, make good hand drawn movies in the future. I mean it’s Disney for crying out loud they created this stuff and I think they will stick to it. Sure they’ve had to adapt along the way, but Tangled is a great return to what made them popular in the first place. It has wonderful and funny characters (including a particular memorable chameleon sidekick named Pascal), good songs and lush animation to feast your eyes on. So what are you waiting for? Don’t be embarrassed if you don’t have kids, just go see it already! GRADE: B+

I like the valuable info you provide in your articles.
I will bookmark your blog and check again here frequently. I am quite certain I
will learn a lot of new stuff right here!
Best of luck for the next!

Hey there, I think your blog might be having browser
compatibility issues. When I look at your website
in Ie, it looks fine but when opening in Internet Explorer, it has some overlapping.
I just wanted to give you a quick heads up!
Other then that, superb blog!

Thanks for a very interesting blog. What else may I get that kind of info written in such a perfect approach? I’ve a undertaking that I am simply now operating on, and I have been at the look out for such info 먹튀검증

I am happy to find your distinguished way of writing the post. Now you make it easy for me to understand and implement the concept. Thank you for the post. 사설토토

"I will be interested in more similar topics. i see you got really very useful topics , i will be always checking your blog thanks

I haven't seen anything interesting in a long time, and I'm writing on this form, so I hope to see you.토토사이트

Hello there! Quick question that’s entirely off topic. Do you know how to make your site mobile friendly?
My web site looks weird when browsing from my iphone4. I’m trying to find
a theme or plugin that might be able to resolve this issue.

An important nanny can provide child care during the children’s family unit setting. Although parents can be temporarily away from, DUST TO HELP YOU SHINE will be here to offer you our babysitting product to temporarily pay attention to the infant, mainly aimed at safety and even wellness belonging to the child even while under much of our nanny’s caring According to agreement around parents and even babysitter, as well as the work designed for babysitters alters from monitoring a taking a nap child, replacing diapers, getting referrals, preparing food items, and to help you teaching the infant to browse and craft (according to the child’s grow old) house cleaning services dubai