Hip to be Cher: So Sue Me, I Enjoyed “Burlesque” 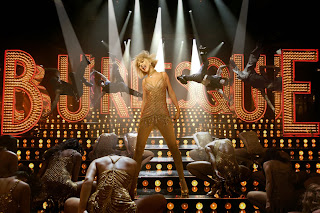 Yes I enjoyed “Burlesque.” When someone’s 10th favorite movie of all time is “Showgirls” can you really blame him? Sure “Burlesque” imitates lots of other movies including the aforementioned “Showgirls” and also “Chicago,” “Moulin Rouge,” “Flashdance,” “Cabaret,” etc. But who cares? It’s flashy and entertaining and clichéd or not, it’s a razzle dazzle musical that might even work better as a stage show. As a film it’s campy fun and never dull.

“Burlesque” tells the story of a young girl named Ali (Christina Aguilera) from a small town in Iowa who has big dreams of making it in the big city. She makes two much better decisions than Nomi did in “Showgirls:” don’t dream about working in Vegas and don’t hitchhike there. Ali moves out to Los Angeles and takes a bus (one way of course!). There she looks for a showbiz job, where she stumbles upon The Burlesque Lounge. Lucky for her Cher is the owner of this little theater. Ok Cher’s not really the owner, but she player her. Her name’s Tess and she doesn’t like when strangers are in her mirror. Ali pleads Cher, er I mean Tess, for a job; any job. She meets Jack (Cam Gigandet), a bartender, and she begins waiting on tables without anyone’s permission. It’s because she’s so determined, duh! Let’s just flash-forward a little to where Tess and her gay BFF/stage manager Sean – Stanley Tucci, reprising his Devil Wears Prada role - finally let Ali into the show as a dancer. However, unbeknownst to the employees at The Burlesque Lounge this young waitress turned dancer has one of the most powerful voices they’ve ever heard. I mean it’s Christina Aguilera for God’s sake!

It wouldn’t be a musical without a romance right? Since Ali is new in town and doesn’t really have anyplace to go, her new bartender friend Jack let’s her crash at his place. It turns out he’s actually straight even though he wears eyeliner at work. Too bad Jack has a fiancé that’s conveniently 3000 miles away. No one’s surprised when they fall for each other, but they have good enough chemistry and they’re easy to root for. But there are bigger worries then whether Ali and Jack will eventually hook up, the Burlesque Lounge is in financial trouble! Tess needs money to keep the place open and Ali’s talented voice may be the only hope.

Ok, so if you haven’t figured it out by now “Burlesque” is a pretty corny movie. But you know what? Burlesque itself is pretty corny. I mean it’s a bunch of women in gaudy outfits dancing to random songs. And people find this stuff entertaining? The movie kicks things up a bit once Ali begins singing at the shows instead of lip-syncing which is the standard practice at the B. Lounge. Tess insists that customers come to see people dance, not to hear them sing. Of course Ali’s powerful voice is enough to make fellow performer Nikki (Kristen Bell) really jealous and I was waiting for a backstage catfight that never quite happened. Although Tess does take out Nikki’s car window with a tire iron at one point. But let’s face it, people go to see musicals for the music and the musical numbers are where the film really delivers. First time writer/director Steven Antin stages the scenes well and there’s plenty of energy radiating from the screen. And all of the singing and dancing is done on the stage, so there’s never that awkward “breaking into song” moment.

Let’s face it, most people will label “Burlesque” as a clichéd guilty pleasure. I don’t think the performances at that bad and Cher and Tucci actually work tremendously well together. It’s not really an atrociously bad film like the Razzie-winning “Showgirls” and it’s not as prestigious as the Oscar-winning “Chicago.” It fits comfortably somewhere in-between. Anyone who’s a fan of campy fun will find a good time to be had at “Burlesque.” GRADE: B+